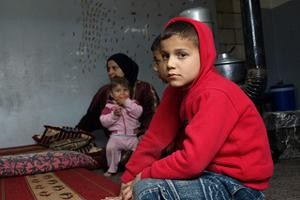 In response to the ongoing crisis in Syria, the Caritas Internationalis network has mobilized to bring aid to the most affected in the region. Development and Peace is contributing $50,000 to Caritas Liban for a humanitarian aid program to help Syrian refugees in Lebanon.

More than half a million Syrians are now living outside their country due to armed conflict between government and rebel forces that began in early 2011. Of that number, an estimated 100,000 refugees are currently residing in Lebanon. Our contribution to the appeal launched by the Caritas network, will go towards helping 3,000 households (approximately 15,000 people) in the North of the country and in the Bekaa Valley in the East. Families will receive resources which are currently difficult to access, such as food, medical and psychological services, and survival kits.

These emergency aid efforts are in addition to our sustainable development projects in the Middle East to support democratic life and promote peace in this arab-muslim part of the world, which is also the cradle of Judeo-Christian civilization. In effect, for this crisis to begin to dissipate, it is essential to work with the local population on creating an atmosphere that is favourable to a return to peace and lasting democracy.

Since 2006, Development and Peace has been supporting the work of Caritas Middle East and North Africa (MONA) on these issues, and that of the Permanent Peace Movement (PPM), also based in Lebanon.

Caritas MONA coordinates expertise exchanges and the alliance work between the 15 Caritas organizations of the region. Today, this work is an integral part of the high quality of assistance that is being provided to Syrians in need, as much in Syria, as in Lebanon, Jordan and Iraq.

The PPM works on preventing and transforming inter-religious and political conflicts in northeast Lebanon, along the border with Syria. It applies its expertise in conflict resolution and prevention in zones where high tensions could potentially tip Lebanon into its own crisis.

For Development and Peace and its partners in the region, the priority is to provide strategic support to: civil society organizations; active participation of women in developing economic alternatives; peace education and the transformation of conflict; citizen participation of youth; and, in the sensitive context of the Middle East, the protection of minority communities, particularly those that are Christian.