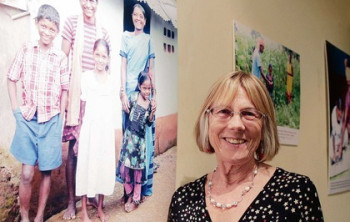 Development and Peace – Caritas Canada adds its voice to those mourning the tragic death of Sally O’Neill, our close collaborator and Honduran consultant, killed on April 7, 2019 in a road accident in Guatemala. Sally was former head of Latin American programs for Trocaire, Development and Peace’s Irish sister agency, with whom she worked for 37 years before retiring in 2015.

She died with colleagues Ana Paula Hernández, representative of the Global Human Rights Fund in Honduras, and human rights activist Ana Velázquez Ordóñez. “Honduras is in mourning, international aid has lost one of its best representatives, civil society and the social movements are hurting at the loss of a woman who gave her everything,” said Leana Corea Flores, a Honduran aid worker and friend of Development and Peace in a Facebook post.

As a long time friend and consultant to Development and Peace in Honduras, Mrs. O’Neill made an important contribution to our work in that country to empower Hondurans to take action to improve the situation of poor communities, and those affected by violence, corruption and environmental degradation.

At a time when Development and Peace is focusing on the journeys of migrants fleeing situations of poverty and injustice with its Share the Journey campaign, Ms. O’Neill was a passionate and articulate advocate for the Hondurans who found themselves forced to flee poverty, the impacts of climate change, gang violence and land grabbing and try to make a new life in the United States. She volunteered with Honduran organizations to help and advocate for migrants making the dangerous journey.

“Sally made an important contribution to not only our work in Honduras, but also to our work with partners throughout Latin America” said Mary Durran, Programs Officer for Latin America at Development and Peace.

Ms. O’Neill had offered technical support to Development and Peace partners in the elaboration of and execution of programs and in the drawing up of international funding proposals.

“Sally was very experienced and knowledgeable, had an incredible talent for working alongside communities in difficult situations and bringing out the best in people. She was generous with her time and had boundless energy and compassion. Her death is a huge loss for not only Development and Peace and our partners, but also for the Honduran people,” added Mary Durran.