Democratic Republic of the Congo: Bishops call for national unity and territorial integrity 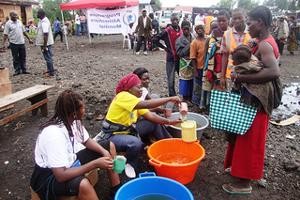 The conflict in the Democratic Republic of the Congo (DRC) is getting bogged down, with civilians being its main victims. The Congolese government of President Joseph Kabila and the M23 rebels met in recent days in Kampala, Uganda's capital, to negotiate an end to the hostilities. Meeting in extraordinary session last December 6, the bishops serving as members of the Standing Committee of the National Episcopal Conference of the Congo (CENCO) reacted publicly to this situation in a message entitled "Congolese People, Stand Up and Save Your Country", formally calling upon Congolese politicians not to sell out the unity of the Congolese nation.

In their message, the bishops stress the importance of ensuring national cohesion to resist external aggression. They observe that the M23 rebel group is responsible for violent acts recorded in the North Kivu region and more specifically "the degradation of human rights caused by the M23 and the armed groups, numerous murders, rapes, kidnappings, the enrolment of minors in the armed groups, illegal imprisonment and taxation, banditism, destruction and looting of national resources and personal belongings and forced massive displacement of populations in conditions that were less than human."

On the other hand, they explicitly deplore the involvement of neighboring countries, noting that "a part of our territory escapes our government’s control and finds itself under the administration of the M23 supported by foreign countries, namely Rwanda and Uganda."

The bishops also criticize the fact that the Mission of the United Nations Organization Stabilization Mission in the Democratic Republic of Congo (MONUSCO) has not fulfilled its promises by the very fact that "the territory of Rutshuru and the town of Goma were not defended and the civil population not properly protected," and the bishops called for a revision of the UN force's mandate so that it can effectively defend the civilian population.

Their call for the triumph of international law and solidarity clearly joins the appeal launched by Development and Peace as well as several other Canadian organizations* requesting an immediate cease-fire and supporting humanitarian assistance to the thousands of displaced and terrorized people.