The death of Rija Andriarinosy, Director of the Development Council of Andohatapenaka (CDA) in Madagascar

In News from our partners
May 8, 2014
by
Khoudia Ndiaye, Communications Officer 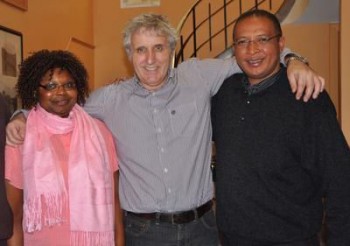 We were very sad to learn of the death of Rija Andriarinosy, Executive Director of the Development Council of Andohatapenaka (CDA) in Madagascar, who passed away as a result of a stroke.

Rija was an invaluable collaborator for Development and Peace. He directed the activities of CDA, which has been one of our partners since its inception in 1982, when Father Jacques Couture founded the centre to fight against poverty and social exclusion and to support the self-promotion of the Andohatapenaka neighbourhood, one of the poorest areas of Antananarivo, the capital of Madagascar.

As part of our Share Lent campaigns, Rija travelled to Canada on numerous occasions to participate in activities in the Quebec City, Bas Saint-Laurent and Gaspésie regions to raise awareness about the everyday lives of underprivileged populations in Madagascar and testify to the support provided.  Furthermore, he welcomed members of Development and Peace from Manitoba, Alberta and Quebec, to the CDA when they visited Madagascar to witness firsthand the work of Development and Peace. He also helped organize youth internships for students from Quebec as part of the Quebec Without Borders program.

The CDA is one of Development and Peace’s biggest partners in Madagascar, collaborating with them for more than 30 years on community development projects. The loss of Rija will leave a great void, and he will be very much missed by all those who have known and appreciated him within the Development and Peace family.

Members of Development and Peace have organized special masses for Rija on Friday, May 9 and Sunday, May 11 in Gaspé, Matane, Rimouski and Sainte-Anne-de-la-Pocatière. We wish to offer our deepest sympathies to his family and friends.

The Church in Madagascar and the DRC come together to address mining injustice.
Read more
Soul-changing Solidarity
Read more