The cry of the Haitian People 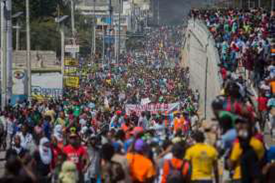 For almost two weeks now, the Haitian people have been in the streets of Port-au-Prince, expressing their anger at the government, which they accuse of being corrupt and of, among other things, misappropriating millions of dollars from the PetroCaribe aid program, which was signed between Venezuela and Haiti as well as several other Caribbean countries. The demonstrations, which have so far resulted in the deaths of seven people, have also paralyzed the country by closing down the main roads.

Chenet Jean-Baptiste, director of the Technology and Animation Institute (ITECA), a partner of Development and Peace – Caritas Canada in Haiti, provides us with a description of the situation in country in the following letter.

Exacerbation of the country’s socio-political crisis has gone up a notch. The country has been totally blocked and at a standstill since Thursday, February 7, 2019. All activities — economic, commercial, educational, public transport or other — are paralyzed. Hospitals are not receiving any supplies. The large urban centres are suffering shortages of all kinds — running water, drinking  water, gasoline, food products, etc. Agricultural products cannot be sent to regional and national markets. Agricultural and industrial enterprises are unable to procure inputs or sell their products.

The socio-political demonstrations and upheaval, still going on just about everywhere around the country, have already caused dozens of deaths and gunshot wounds, as well as extensive material damage. The country’s economy, which had already been bled dry, will come out even weaker. There are no immediate signs on the horizon of any relief or abatement of the situation, although there has been no lack of efforts at facilitation and mediation. The latest attempt is the one jointly launched by the Catholic, Episcopal and Protestant churches. There is no guarantee, however, that this patriotic cry of alarm will succeed in drawing the attention of the protagonists.

We are anticipating that the current crisis is going to last a long time. Because even if a positive outcome is found for those who have mobilized to overthrow the government, the uncertainty will persist in multiple forms. And the most obvious uncertainty is the worsening economic and social conditions of a population already subjected to deprivations of all kinds. It should be remembered that the country's most important agricultural season is prepared in February and March, but the determination of the demonstrators to maintain the blockading of roads and activities until the achievement of their objectives seems unshakeable.

Hence, the country hasn’t experienced a socio-political crisis of this magnitude since 1986. And it is unfolding in front of the relative indifference of the major international media and the tutelage powers of the Core Group, comprised of Brazil, Canada, France, Spain, the United States, the European Union, the Organization of American States (OAS) and the United Nations, who seem to have been caught by surprise.

ITECA, like all the other Haitian social organizations, is bearing the full brunt of the fallout from the crisis. Our normal support and accompaniment of peasant communities is paralyzed. AGRISOL, the social and solidarity small farmers’ enterprise which we are supporting will suffer net losses both in terms of livestock and production. And we are unable to foresee a new arrangement for our programming in the immediate future, since the continuation of the blockades leading to the closure of our offices is already announced for another week.

We are both relieved and worried. Our relief comes from the fact that the awakening of citizens to say they are fed up is massive and national in scope. The social mobilizations that are taking place are being borne chiefly by young people who have almost achieved imposing the requirement of social change as an imperative. However, we are maintaining a careful vigilance over an ominous situation. On the one hand, the extreme exasperation of the population is being expressed in a near-total institutional vacuum with a social movement that has been considerably weakened over the past 15 years. On the other hand, the spectre of a humanitarian crisis resulting from worsening destitution and nutritional insecurity is very real. Everything must be done to ward that off.

ITECA — as soon as the situation allows — will establish in conjunction with the country’s farmers’ associations an overview of the context as well as an assessment of new issues resulting from the new situation. This process will include considering possible adjustments to our support strategy.

We thank all those who have kindly asked for news about us and have expressed their solidarity. The members of our various teams stuck in the field have been able to return to their families. The ordeal was particularly stressful for the 40 men and women farmers taking a training course in Gressier, south of Port-au-Prince, who were able to reach Gros Morne, in the country’s north west, under a hail of stones and by braving the barricades.