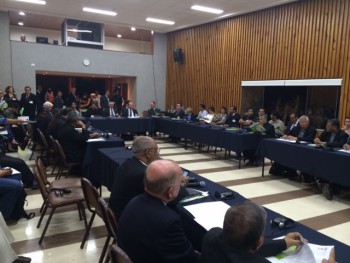 It seemed a million miles away from the melting glaciers, the eroding deserts and the shrinking forest frontlines of the international battle against climate change. A Catholic school hall surrounded by manicured gardens in an upper class suburb of Lima was the setting for a high level dialogue between the Peruvian bishops’ conference, bishops from France, Brazil, Bangladesh and South Africa, and delegates from some of the developed nations attending the UN climate talks currently taking place in Lima. The conference is known by its acronym, COP 20, which means the 20th meeting of the conference of the parties to the UN Framework on Climate Change Convention (UNFCCC).

In the presence of diplomats from France, Germany, the UK and Chile, (no Canadian representative was in attendance) and Peru’s minister of the environment, Manuel Pulgar Vidal, a Filipino woman in the audience expressed her anguish as Typhoon Hagupit prepared to unfurl its wrath on the Philippines - the second major typhoon to hit the country in barely 13 months.

“Every time there is a COP, a new super typhoon threatens the Philippines,”the woman told the group. “Global leaders in Paris must find a deal, otherwise we will all perish,” she said referring to the next COP meeting, which will be held in Paris, France.

By some coincidence, it was during the last COP conference in Poland that Typhoon Haiyan, (known locally as Yolanda), hit the Philippines, and the Filipino delegate, Yeb Sano, started a hunger strike to pressure world leaders to make binding commitments to reduce greenhouse gas emissions.

Our partner CEAS, which is the Peruvian Bishops’ Social Action Commission, works at the grassroots with the victims of global warming, and is on the frontlines of this battle, working with communities affected by the gradual melting of glaciers in the Peruvian Sierra Highlands, and the gradual deforestation of the Amazon.

In his opening remarks, Archbishop Pedro Ricardo Barreto of Huancayo, in Peru’s central Sierra, pointed out that his country has a low global carbon footprint, yet is highly vulnerable to climate change and suffers disproportionately from the ravages already being seen.

Bishop Sithembele Anton Sipuka of South Africa, representing the Bishops’ Conferences of South Africa and Madagascar, warned the delegates that the struggle against poverty and climate change go hand in hand.

“Poor people pollute because they live in cramped conditions and they overuse resources because they need to survive. We cannot tackle climate change without dealing with poverty.”

Bishop Zanoni Castro of Feira de Santana of Bahia, Brazil, said that large-scale industrial agricultural projects, including soya, are drying up aquifers in his region, and provoking droughts.

“We need more respect for the traditional ecological wisdom of Indigenous communities and small agricultural projects, rather than agribusiness.”

“Science is clear – humankind is responsible for climate change,” said Ottmar Edenofer, a scientist from the International Panel on Climate Change, who had already given a technical briefing to the bishops earlier on. He said that the Catholic Church is ideally placed, as a global citizen, to push politicians to take action to reduce greenhouse gas emissions before it is too late.

“We are living not in a time of tragedy, but a time of drama which requires a decision, faith and bold steps,” Edenofer said.

Bishop Salvador Pineiro, President of the Peruvian Bishops’ Conference, told the delegates, “We need a binding agreement for all states. This is not just an ecological issue, it is a moral one.”

The bishops released a statement which reiterated the joint call of Caritas Internationalis and CIDSE for a global pledge to keep temperature increases below 1.5 C, and for sufficient international funds for the Green Climate Fund, which will pay for projects to allow poor communities to adapt to the inevitable climate change whose effects they are already feeling. It is hoped that such an agreement will come at the next COP meeting to be held in Paris in December 2015. The Lima talks are to prepare the way for the Paris meeting.