Congo: Call for action to end violence in DRC 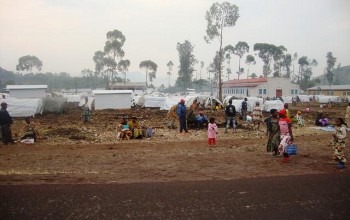 The capture of the city of Goma by ‘M23’ rebels in the Democratic Republic of the Congo (DRC) has been a major cause for concern for the security of the local population. Ongoing violence in the DRC since 1996 has led to five million deaths and this latest incident has caused the displacement of an estimated 100,000 people.

Development and Peace along with several other Canadian organizations are together calling on the Canadian Government to ask for an immediate ceasefire and to support aid for the thousands who have been displaced and terrorized. The statement also asks that Rwanda and Uganda be condemned for supporting rebel groups and that the mandate of the United Nations peacekeeping mission (MONUSCO) be strengthened in order to have the ability to protect the local population.

The Catholic Church in Africa has also called for the cessation of war. Presidents of Bishops’ Conferences and Bishop-Presidents of national Caritas organisations from 34 countries in Africa signed a statement condemning the conflict. The African bishops say, “We are outraged and shocked by the escalating armed violence in eastern Democratic Republic of Congo which is causing again a major human tragedy. Thousands of men, women and children, the victims of this war which is imposed on them, are displaced and abandoned in destitution in Goma and its surroundings. They are exposed to the bad weather, hunger, rape and all kinds of abuses, including recruiting of children into the army. This constitutes an offence to their dignity as human beings and children of God.”

The bishops are calling on the international community to end the suffering and despair of the civilian population in eastern Congo. They said the UN, the African Union, the EU, Congo’s government, regional governments involved and multinational extractive companies must address causes of the conflict through dialogue to end the cycle of violence. The African church leaders said, “The perpetrators of such violence and destruction should be brought to justice.”

In addition, Bishop Nicolas Djomo, the president of the National Episcopal Conference of the Congo (CENCO) expressed his dismay over the suffering of the local population. “Instability is being perpetuated in Kivu to facilitate the pillage of mineral resources,” he said in a statement.

With support from Development and Peace, CENCO has been working to improve democracy in the country and is monitoring the extraction of natural resources. Control and access to the DRC’s mineral riches has been a central source of conflict in the country. Another Development and Peace partner, Caritas Congo has been responding to the humanitarian needs of the local population.