The Church in Madagascar and the DRC come together to address mining injustice.

In Advocacy, News from our partners
September 27, 2013
by
Khoudia Ndiaye, Communications Officer 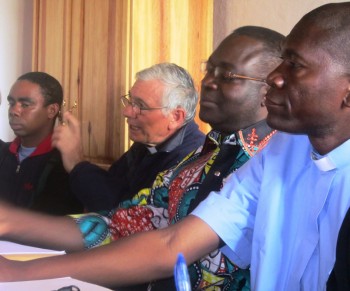 From September 1st to September 8th, 2013, a mission that included bishops from the Democratic Republic of the Congo visited Madagascar. The group was made up of the Most Rev. Fulgence Muteba Mugalu, Bishop of Kilwa Kasenga; the Most Rev. Ruvezi Kashala Gaston, Bishop of Sakania Kipushi; Father David Luhaka of the diocese of Kalemie Kirungu; and Fidèle Banza Mutombo, Development Advisor for Community Radio of  Katanga (RCK).

Development and Peace, which works in both countries, facilitated the mission to allow Congolese and Malagasy bishops to meet and exchange on the role of the Church with respect to the issue of the extractive industries and development. The Congolese bishops learned about the approaches and the strategies developed by the Church in Madagascar as a way to work with and support communities affected by the extractive industries.

On September 7th, 2013, Pope Francis also underlined the responsibility of the mining sector as regards local populations and the environment, in the hope that mining activity can truly be harnessed for purposes of integral human development. In fact, these activities have ecological and social impacts that can last for a number of generations.

The Most Rev. Fulgence MUTEBA, Bishop of Kilwa-Kasenga, was part of the delegation. Here are some of his observations from this fruitful meeting:

From September 1st to September 8th, 2013, an episcopal delegation from Katanga travelled to Madagascar on a pastoral mission, reflecting the commitment of the Church to promote natural-resource management for the benefit of local populations. The delegation included two bishops: His Excellency, The Most Rev. Gaston RUVEZI, Bishop of Sakania-Kipushi, and His Excellency, the Most Rev. Fulgence MUTEBA, Bishop of Kilwa-Kasenga. They were accompanied by Father David NGOY, head of the Justice and Peace Commission of the Kalemie-Kirungu diocese, and Fidèle BANZA, Development Advisor for Community Radio of Katanga (RCK), an important partner in Development and Peace’s programming in the DRC.

The goal of the mission was to exchange experiences and good practices concerning efforts made by the Church to promote natural-resource management for the benefit of resident populations. In Antananarivo, we exchanged views and experiences with His Excellency, The Most Rev. Odon Marie-Arsène Razanakolona, Archbishop of Antananarivo, as well with several members of the Episcopal Conference of Madagascar, before conversing with members of the coordination office of the Taratra project, an initiative established by the Episcopal Conference of Madagascar to promote good governance in the mining sector. We also travelled to the diocese of Moramanga, located about 100 kilometres to the east of the capital on this impressively large island. A number of working sessions took place with the diocesan bishop, His Excellency, the Most Rev. Gaetano di Pierro; members of the diocesan coordination committee of the Taratra project; the local network of the project; local political and administrative authorities; and several residents of mining sites.

The exchanges between the two Churches were very rewarding indeed. It was concluded that the issue of social responsibility of the extractive industries must move from the margins to become a central element of the Church’s mission in African countries. It must be part of the overall pastoral plan and, in all respects, be addressed across the board in each and every pastoral sector. The upper hierarchy of the Roman Catholic Church shared this concern at the same moment, since on September 7th, 2013, the Pontifical Council for Justice and Peace in Rome convened a meeting focusing on the same issue. This was no coincidence, but instead reflected a pastoral necessity in a number of local churches, especially in Sub-Saharan Africa.

After explaining the work of the Church in the DRC by talking about the natural-resource management pastoral of the Ad Hoc Episcopal Commission for Natural Resources (CERN) and the diocesan natural-resource observatories, the Katanga delegation especially saluted the unwavering devotion of Malagasy bishops in this pastoral sector. Their commitment is nothing short of a prophetic testimony that serves to radiate the influence of the Church of God and to increase the credibility of its message among the Malagasy people. It also hailed the adoption of the Taratra project at the grassroots level, i.e. by players from all representative social strata, from mining companies, and from various religious denominations. And the most striking thing of all is that they are all volunteers! Hand in hand with their bishops, these players, who are called network members in Madagascar, do extraordinary work, promoting and monitoring the Tatatra project and raising awareness concerning its objectives. Through their efforts in each diocese concerned by the Tatatra project, they help draw up and execute a participatory budget comprising priorities determined by local populations themselves that must be funded by royalties paid by mining companies. The budget is under the purview of the local mayor, but is executed under the watchful eye of recipient populations and members of the network.

This synergy represents capital in the form of trust, transparency and effectiveness. Everyone is a winner, even the extractive industries! However, there is still a great deal left to do in Madagascar. The current Mining Code, which grants a mere two percent of the mining companies’ annual revenues to local populations, is in urgent need of change. Mining contracts, which remain one-sided and opaque, must also be made public, reviewed and revised.
Having returned to Katanga on Sunday September 8, the episcopal delegation resolved to intensify the natural-resource pastoral in eight Katanga dioceses and to work at fostering grassroots-level appropriation of all initiatives designed to increase the economic spinoffs of the development of natural-resource wealth for local populations. We must work together, transparently and in synergy, especially in the spirit of the participatory budget experience.