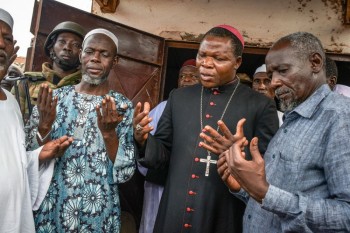 As violence continues to escalate in the Central African Republic, the Catholic Church in the country is calling for an immediate ceasefire.

"We're deeply concerned about the crisis in Central African Republic (CAR). The situation in Bangui is chaotic. Many people have been killed. The fighting must stop immediately," said Archbishop Dieudonné Nzapalainga of the capital Bangui.

This call came after extremely violent clashes took place in the last few weeks that left hundreds dead. This most recent wave of fighting has led the United Nations to approve a small peacekeeping mission formed of African and French troops in hopes of restoring calm.

The country has a long history of instability, and the situation took a turn for the worse following a coup in March, when the Muslim rebel group Seleka took control of the government in the mainly Christian country. Since then, there has been an increasing amount of violence between groups vying for power, and the conflict has begun to descend into a sectarian civil war, with fears of genocide. Traditionally, Muslims and Christians have lived peacefully side by side, and leaders from both faiths have issued joint calls for peace.

Ongoing fighting has left an estimated 400,000 people displaced and 4.6 million in need of assistance. Tens of thousands of those affected are taking refuge in churches and church properties throughout the country to escape the brutality that is taking place on the streets. There have been reports of villages being burned, rapes and the recruitment of child soldiers.

“We have opened the doors to everyone, Christians and Muslims alike. We give food to people who are at the mission but also to 2,200 people who fled to the mosque,” said Fr. Aurélio Gazzera, a director with Caritas CAR, which is providing aid. “We have no interreligious or inter-community problems. The problem is with the Seleka,” he added, stressing the desire for peace.

"There are five thousand people hiding in our parish buildings," said Fr. Anicet Assingambi of St. Charles de Lwanga parish in the north of Bangui. "A woman told me she'd seen her brother gunned down. All men are shot at if they go outside. There is a young man dead on the street outside, but it's too dangerous to go outside to remove his body."

Caritas CAR is organizing assistance, such as food and medicine for the displaced and victims of violence, despite the security risks involved. Development and Peace is supporting these efforts and shares in the Church's call for an end to the violence.

Development and Peace is following events closely with other members of Caritas Internationalis, which has produced a short video chronicling the troubling situation in the CAR.

Activities in full swing thanks to your generosity
Read more