Cerro de Pasco: A community being swallowed by a mine 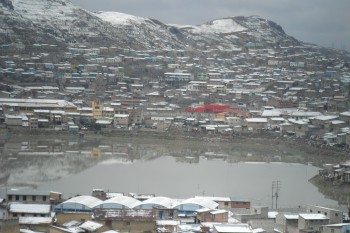 At 4,380m altitude and with a population of 299,000, Cerro de Pasco is definitely Peru’s highest city and also one of the world’s most bleak and inhospitable. The damp cold here penetrates to the bone; freezing rain and wet snow are commonplace, as are respiratory diseases including pneumonia. The cold is so raw and bleak that people wear anoraks and woolly hats indoors. For the unaccustomed, the extreme altitude wraps an iron like fist around the head, causing constant headaches, breathlessness and palpitations; foreigners routinely visit the hospital for oxygen.

The city is a collection of grey houses perched around a huge, muddy abyss of terraces that make up an ever-expanding open pit mine. The pit threatens to swallow up everything in its path and has already made victim of heritage buildings and other symbols of the city’s history. The Peruvian Volcan mining company carries on with its plan undisturbed, as not many government officials are about to make a 7-hour trip up into such an inhospitable region. As it expands, people abandon their houses and build new ones, which spring up further and further away on the surrounding mountains.

Nearly 14% of the municipality’s territory has already been given away to mining companies in the form of mining concessions.
“The government doesn’t care about the people of Cerro de Pasco,” says Gladys Huaman, director of Labor, Development and Peace’s partner here. “We are a forgotten city.”

Elvira, a local journalist, recalls the family home that she once lived in and now no longer exists, as it was demolished to make way for the voracious mine. She remembers company officials putting pressure on her father to sell them the house. Her father’s reluctance was encouraged by the mayor, who told him to stay put and promised that the city would provide better facilities, including running water. When the mayor’s murdered body was found close to the mine a few weeks later, Elvira’s father understood that it was time to relocate.

Today, violence is not necessary to get the population to move out of the way of the mine’s expansion.
Celia, a Labor worker, used to live right close to the open pit mine, but one day her kitchen collapsed. An architect told her the collapse was due to excessive damp caused by the nearby mine expansion, so she moved further out.

Pollution levels in Cerro de Pasco have been shown to reach high levels. Tests run by the archdiocese of Huancayo showed that earth samples taken at an agricultural site in Cerro de Pasco had lead levels of 4,556 parts per million(ppm), compared to the acceptable Canadian norm, which is 70 ppm. Arsenic levels were at 314.7 ppm, whereas the acceptable level is 12 ppm, while cadmium was at 76.8, when the acceptable level is 1.4 ppm. Tests run by Labor in cooperation with the archdiocese of Huancayo showed that 91% of children have heavy metals in their blood.

Despite these high pollution levels, the government has found a way of selling drinking water from Cerro de Pasco to Lima – a Brazilian company has been awarded the concession to pipe water down to the city. The fact that the population of Cerro de Pasco does not have an adequate water supply seems to be a detail that has escaped them.

Labor is pushing the government for a plan to relocate the whole city of 80,000 houses elsewhere. Although the area has been declared an environmental emergency by the government, little has been done to find a solution, and nothing has been done to slow the voracious expansion of the mine. Thankfully Labor is present to defend the population. It got the government to issue a ruling to draw up an inventory of the number of citizens displaced by the mine and of those suffering from pollution related health problems. The rulings, Labor say, will force the government to eventually act. But things are moving slowly, and the people will have to be persistent.

Seeing firsthand the impacts of a mine
Read more

A Voice for Justice will be heard on May 14!
Read more