In Emergencies, Field visits, News from our partners, Solidarity trips
July 9, 2014
by
Lynda Paziuk, Member of Development and Peace 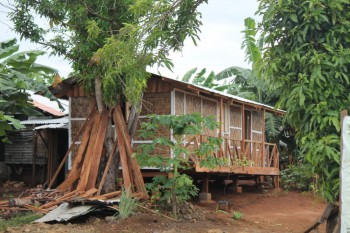 At 6 am this morning, we flew from Davao to Tacloban, on the island of Leyte. Tacloban was the largest city to be hit by Haiyan, the devastating super typhoon (called Yolanda in the Philippines) that swept through the Visayan Islands on November 8th of last year. Three thousand people in this community alone died as a result of Yolanda and evidence of storm damage is still obvious, even at the airport terminal and on the tarmac.

On our drive along the coast we saw more horrendous carnage caused by the typhoon – thick coconut and palm trees with their trunks snapped like matchsticks. Mangrove forests destroyed. Houses and buildings smashed. This view went on for miles and miles along the winding and badly-damaged road.

After two hours of driving, while dodging children, dogs, tricycles and other moving objects, we arrived at the municipality of Giporlos in Eastern Samar. There, a surprise welcome awaited us! The community had gathered to thank us as representatives of Development and Peace and our partner Catholic Relief Services for new houses that been erected.

Celebrating involved sharing their stories, and sharing food, dance and song with us. The young people sang “Surviving Yolanda,” an original composition, and other favourite songs of the community. One of the recipients of a house built through the support of Development and Peace expressed her appreciation this way: “Finally we can sleep at night.” She and her family have been sleeping in a tent since November.

Lots of joy and laughter were also shared and as we held hands with the community as they sang a song entitled “Holding Hands” some of us were overcome with emotion. Knowing that thousands of shelters are being built or improved because of the support of Canadians and the labour of the people themselves, gives one an awesome feeling.