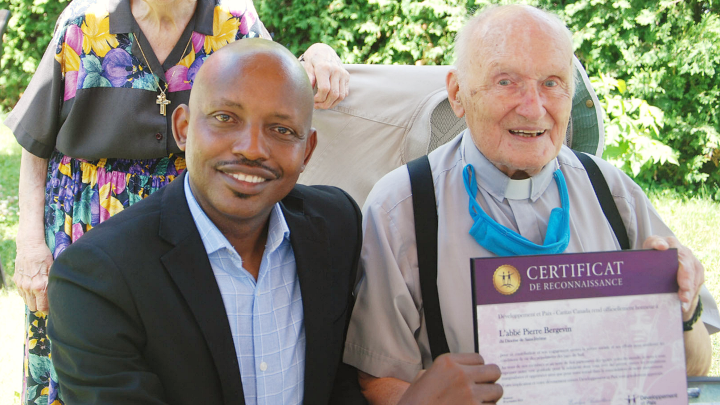 The 100-year-old Fr. Pierre Bergevin (right) shared the secret of his longevity with Richard Rudashama (left)*.

June 20 was a special day at St. Theresa of Avila Parish in the Diocese of St. Jérôme, Quebec. On the sunny day, the little islands of white clouds in the vast blue sea of the sky were reminiscent of the Creator’s greatness. The parishioners were turned out in their Sunday best. On the program for their Mass: a tribute to Father Pierre Bergevin.

But who is Fr. Bergevin and why was he awarded a commemorative plaque?

Bergevin, who officiated the mass with Fathers Tony Solano and Jean-Marie Proulx, will be resetting his odometer on August 3, his hundredth birthday! His age, when announced, though, seemed like a made-up diversion, because he looks much younger. He was active during the mass and took communion with the amazed parishioners who were honoured to witness such grace.

Bergevin, who was ordained a priest on June 1, 1947, is orderly and capable of adapting to any situation. When I asked him the secret of his longevity, he said, “I think the human body wants discipline and a certain constancy.” He has striven for this constancy in his physical and intellectual activities. Being unfussy, he eats whatever is available and gives thanks to God. Forged by the Scouting spirit and the time he spent in the Canadian Officers’ Training Corps before dedicating himself to God, Bergevin has extraordinary determination and endurance. An avid walker, he has hiked the arduous Camino de Santiago pilgrimage route several times. Having several projects on the go at once, Bergevin often leaves memos strewn on his office floor to remind him of his various project tasks.

“Fr. Bergevin is an emblematic figure in our international solidarity movement, a person of undeniable leadership. He leaves an indelible and inspiring mark on the hearts and memories of Development and Peace members,” Gagné said, recalling, “As soon as he arrived in the late 1970s, he formed a Development and Peace committee and has always worked to make things happen. Some people still remember the labyrinth of kiosks he set up in the church basement to explain Development and Peace's mission, or the long walks he undertook for several years to raise funds for Development and Peace.”

Rounding off his tribute, Gagné called Bergevin “a great unifier who has always been committed to solidarity with those in need.” He concluded, “He is a man of faith who knows how to preach through his gestures and his way of being. He is, simply, inhabited by the Presence of God.” 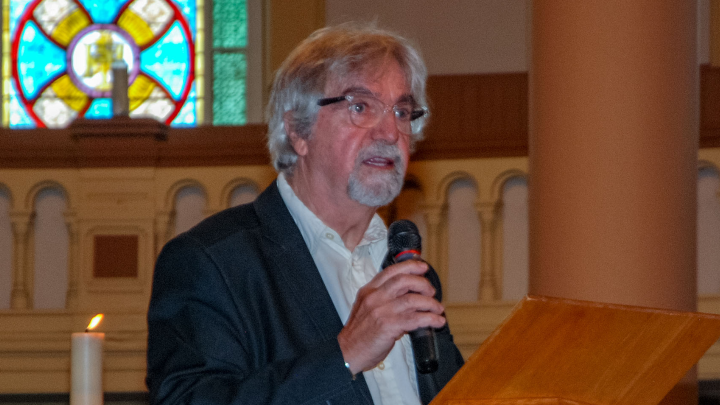 Bergevin, in his turn, said that his commitment to Development and Peace did not waver since he was first enamoured of the philosophy and spirit of its mission upon its establishment in 1967.

Its mission, he continued, is to contribute to people’s growth by giving them the means to take charge of their lives. “It’s the lasting work of humanization of the type that Jesus did and asked his disciples to do. One can call it ‘evangelizing’ because to evangelize is also to humanize. And Development and Peace can do this work because we give it the means to do it through our donations.”

After the mass, it was as if Bergevin was soaked in a bath of milling admirers, all suitably socially distanced, of course. Watching from my amazed observer’s corner, I had a fond conviction reconfirmed. Beyond contexts and dynamics, there is a certain magic about Development and Peace that transcends structures, politics and challenges—a torch of harmony and humanity. Is this not the voice of the Holy Spirit?

* Photos by Jaqueline Lefebvre, of the Diocese of St. Jerome, Quebec