In Field visits, Members in action, News from our partners, Solidarity trips
July 7, 2014
by
Laura Perfili, Member of Development and Peace 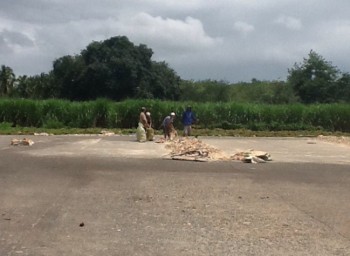 We are on the ninth day of our trip, and our day started well before sunrise. We were joined by staff and executive members of the Agri-Aqua Development Coalition (AADC) for the 4.5-hour drive to the municipality of Pangantucan. We first met with Mayor Manolito Garcis, who expressed his heartfelt gratitude to Development and Peace for its support, which has assisted in improving the municipality’s water system, roads, and health and harvesting facilities.

Since 2004, the average daily income has increased from 400 ($10 CDN) to 1000 pesos ($25 pesos), housing conditions have improved and the number of children able to attend school has increased, explained the mayor. Development and Peace, in partnership with the AADC, has supported the Balugo Farmers Multi-Purpose Cooperative (BFMPC), a collective that is making a real difference to the people of this municipality The BFMPC grows and harvests cassava, a root crop that is a staple food but is also used as a starch product, for animal feed, to make medicinal wine and to make gin. The largest buyer of the BFMPD’s cassava is the San Miguel Brewery Inc., a Filipino food, beverage and packaging company.

The cooperative decided to switch from corn to cassava in 2007 because cassava would be more profitable than corn. The cooperative can produce 50 tonnes or more of fresh cassava per hectare in a growing season, which is far greater than a corn yield. The cooperative owns 476 hectares of land and has a harvesting operation where they dry, slice, chip and pack the cassava for shipping.

We were able to watch the employees gather dried roots and use a simple but effective machine housed in the on-site warehouse to chip the roots for packaging. We also took a walk out back, passing through a sugar cane plantation and across a narrow bridge made of three sticks of bamboo, to see a cassava plantation.

During our visit, we heard from many of the Board of Directors and employees of the BFMPC’s, but it was the manager of the cooperative who stood out the most for me. He told us that his two daughters had just graduated from college, and that this would never have been possible without the cooperative. He expressed his appreciation for Development and Peace’s involvement and support. What an amazing testament to the wonderful partnership between Development and Peace and the AADC!