Canadian civil society is calling for access to justice 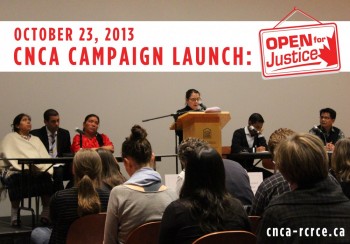 23 Canadian organizations issued a call to action to Members of Parliament and all Canadians this week, to ensure that victims of abuse by Canadian extractive companies abroad can access justice in Canada.

Development and Peace is a member of the CNCA, and our 2013 education campaign, A Voice for Justice, calls on the Government of Canada to establish an independent ombudsman for the Canadian extractive sector that can investigate complaints brought by communities overseas where companies operate.

“It is time for Canada to create a mandatory extractive- sector Ombudsman and to legislate access to courts for people who are harmed by the overseas operations of Canadian oil, mining and gas companies,” said Emily Dwyer, Coordinator of the Canadian Network on Corporate Accountability (CNCA) on at the national launch in Ottawa.

The Office of the Extractive Sector CSR Counsellor, established in 2009, has proven to be too weak to address complaints because it is a voluntary conflict resolution mechanism that cannot investigate cases nor recommend sanctions or remedy.

“We brought the first case to the CSR Counsellor’s Office in 2011 when Mexican workers were harassed and intimidated because they tried to unionize at a Canadian mine,” said Valeria Scorza of ProDESC, a human rights organization based in Mexico, at the launch in Ottawa. “Even though the Counsellor found that our complaint was made in good faith and met all the criteria, she couldn’t do anything because the company wasn’t willing to participate.”

Ms. Scorza’s experience is not unique; no complaint has ever gone through a full review process. In most cases the company has walked away, thereby ending the process. Even the now disbanded advisory panel to the CSR Counsellor recognizes the Office is not effective.

“In our globalized world we can’t hide behind the idea that the harm is happening somewhere else and is someone else’s problem,” says Alex Neve, Secretary General, Amnesty International Canada. “Canadian companies need to be held to account in Canadian courts.”

“We are very pleased to see that so many organizations working in a wide variety of fields have mobilized around the issue of access to justice for communities affected by the activities of Canadian extractive companies,” states Michael Casey, Executive Director of Development and Peace.  "This mobilization demonstrates the importance of these issues, as well as the urgency for the Canadian government to provide real solutions that will ensure that the human rights and the environment of those people who live near Canadian extractive projects are respected.”

For more information about the CNCA’s Open for Justice campaign, visit: cnca-rcrce.ca.

A Voice for Justice will be heard on May 14!
Read more
Many communities affected by mining in Peru
Read more