Canada at the table in Syrian peace negotiations 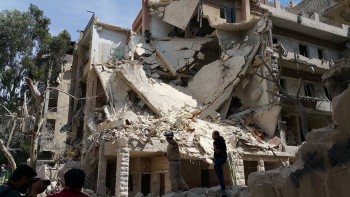 As Canada’s Foreign Affairs Minister Stéphane Dion returned from his first meeting with the International Syria Support Group (ISSG) in Vienna, Austria on May 17, Syrians in besieged areas continue to struggle to survive, and Syrians around the world are attempting to keep hope alive for an end to this tragically long conflict.

In March, Development and Peace launched an advocacy campaign calling on the Canadian government to do everything in its power to find a path to peace in Syria, including ensuring access to humanitarian aid as well as ensuring that Syrian civil society has a voice in the peace negotiations. Many of these messages were carried by Minister Dion at the talks.

With the recent invitation to Canada to sit on the ISSG, which includes Russia, the United States, and 23 other countries and organizations, the Canadian government can now have an influence on the negotiations. At the one-day meeting, Minister Dion raised concerns over the Syrian regime’s continued use of barrel bombs on civilian neighbourhoods and the targeting of hospitals and medical clinics. The ISSG also sought solutions to the sieges that have kept hundreds of thousands of children, women and men without access to food, medicine and urgent humanitarian supplies.

As a result of the meeting, the ISSG has called on the World Food Programme to undertake humanitarian airdrops across Syria if access is not provided by June 1, 2016. Canada is contributing financially to these airdrops, which are a last resort when humanitarian agencies cannot reach the besieged areas any other way.

Several warring parties in the conflict are defying international humanitarian law which obliges them to allow and facilitate access to humanitarian aid, as well as United Nations Security Council resolutions. Our partner Aosus, for example, is located in Eastern Ghouta, a region that has been besieged by the Assad regime since October 2012 and hasn’t received aid from the United Nations in more than two years despite repeated requests to the regime to allow access to the area.

Through our partners in Syria and neighbouring countries, Development and Peace will continue to monitor the humanitarian situation as well as the ISSG talks, in hopes that the United Nations-led peace talks will soon begin again.

and sign our petition calling on the Canadian government to do everything in its power to protect civilians in Syria and push for an end to the conflict through diplomatic means.

Watch the following video to see our project with Aosus: