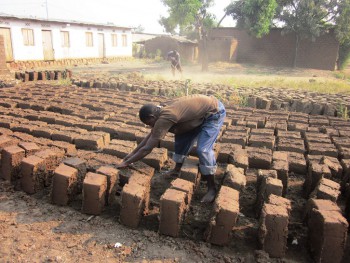 On the night of February 9-10, residents of the northern neighborhoods of Bujumbura, the capital of Burundi, woke up to grieve for themselves and their fellow citizens. The neighborhoods were submerged as a result of major floods. Torrential rains caused a destructive mix of water and sediments to flood these areas, causing 76 deaths, including some children, and 708 injuries.

The poorer neighborhoods of Kamenge, Kinama and Buterere were among those most damaged by the floods. A total of 4,655 houses were submerged, of which 2,361 were completely destroyed, leaving behind streets littered with rocks and mud, as well as thousands of vulnerable, newly homeless families. The rains also swept away cattle, arable land, bridges and roads, thereby depriving entire neighborhoods of drinkable water and power for several weeks.

In order to help disaster-stricken families, Development and Peace is providing $50,000 to its long-standing partner, the Kamenge Youth Centre, an organization operating in the northern part of Bujumbura and whose activities extend across six of the capital’s thirteen communes. Thanks to this funding, houses belonging to 67 stricken families living in the northern neighborhoods of Bujumbura, particularly in the communes of Kinama and Buterere, will be rebuilt or renovated.

The relief project is currently being carried out by young adults attending the Centre’s summer camp. They are hewing the houses’ bricks and distributing finishing materials (sheets, windows, doors, etc.) to the 67 families. According to Guy Des Aulniers, Emergency Programs Officer at Development and Peace, “The results are very encouraging and the young people involved really take to heart the mission that they have been given.” Mr. Des Aulniers adds, “We have to keep up the efforts already under way and rebuild the homes of these families that have lost everything; we must help them recover their dignity and regain their place within the community.”

During the summer, young people from a variety of backgrounds have been invited to participate in summer camps organized by the Kamenge Youth Centre in order to encourage tolerance amongst the youth, by creating a spirit of fraternity, reconciliation and solidarity with a view to building the future of their country in unity.