In Emergencies, News from our partners
September 13, 2013
by
Kelly Di Domenico, Communications Officer 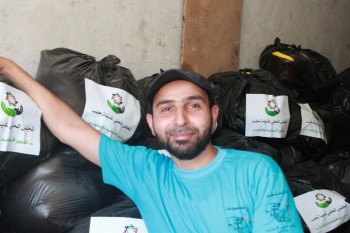 The conflict in Syria has intensified over the last few months. With increased violence, people are continuing to flee the country. However, there are those who can’t leave and as such, they must cope with ever-worsening and arduous conditions. There are now 4.5 million people within the country who are displaced, which is the equivalent of about 20% of the population. In addition, ongoing hostilities have destroyed infrastructure and left cities isolated and without basic necessities – including food. What little is left, is unaffordable for much of the population.

Development and Peace has partnered with Menapolis, a regional organization that is working to bring about sustainable change in the Middle East, to respond to the increasing threat of hunger in Syria. Working in collaboration with local officials, it has organized food distributions in neighbourhoods in the city of Aleppo that are most in need of assistance. Food baskets were distributed to 1,750 families who were identified by taking into account employment, income, the number of children and whether members of the family are ill or in need of medical attention. The baskets contained rice, bulghur wheat, corn, oil, sugar, milk, flour and olives, all of which were purchased locally to contribute to the local economy.

The meals made with this food also provide much-needed comfort in a time of upheaval and uncertainty, where the moment of gathering around this shared meal is a celebration of family, a time to partake in friendly debate and kinship and a moment of normalcy amongst days filled with apprehension and uncertainty about the future.

Menapolis recognizes how food is sustenance but can also bring a community together. It knows that the community needs more than short-term relief, it needs hope. It wants to offer Syrians more than just bread, it wants to offer them the bread of life. In other words, it wants to give the community the opportunity to regain its sense of purpose and help them feel they are working towards a future where there will be peace and a return to normalcy.

With that in mind, Development and Peace is helping the organization put into motion plans to build a bakery to provide bread for five villages. The bakery will employ families that have been disproportionately touched by the crisis, such as widows and families with no source of income. The bread will not be sold for profit, but only to cover operational costs. Already, the community has mobilized to get the bakery going. It has identified a secure location for where it can be built and has arranged a system that will allow for safe delivery of the bread.

Plans are for the bakery to open at the end of September. Once the bakery is up and running, it will have the capacity to process 20 tonnes of flour per day - enough bread to feed 50,000 people. Enough bread, so that each day 50,000 people can receive a piece of hope and look forward to tomorrow.