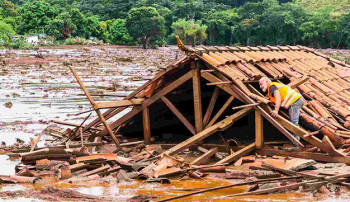 Together with our partners on the ground, Development and Peace joins in solidarity with the victims of this tragic socio-environmental disaster and proposes ways to prevent another tragedy.

On January 25th, 2019 in Brumadinho, Minas Gerais, Brazil, the collapse of a dam operated by Vale - a Brazilian mining company that owns many mines in Canada – caused another terrible human tragedy and environmental disaster. Rescue operations are still ongoing and the exact number of victims is still unknown, but it seems that as many as 300 people were killed – most of them employees of the company itself, Vale. A criminal investigation has begun, with 3 Vale directors and 2 contractors arrested so far.

Vale was one of the companies involved in the burst of the Samarco dam (managed by BHP Billiton Brasil Ltda and Vale) near Mariana, Minas Gerais, Brazil in November 2015, causing the death of 19 people and a huge environmental disaster that to this day affects the livelihoods of people in the region. Four years ago, the “Mariana” disaster highlighted a huge gap in the international justice system – and still today, many of the victims are waiting for justice.

Vale is among the mining companies still receiving investments from North American and European banks despite recurring violations of environmental and human rights, as investigated in the Dirty Profits 6 report. According to the report, banks continue to turn a blind eye to abuses and are not taking strong enough action to ensure that mining and extractive companies respect human rights and the environment. Beyond the responsibility of the company in Brazil, companies in Canada, our own investments and our own consumption of products containing minerals could have links with the disaster.

As stated by Iglesias y Minería in this statement, impunity and the lack of action, including satisfactory reparations for the victims of previous crimes, has allowed the new crime at Brumadinho to take place. Another important factor has been the pressure by powerful companies to weaken governmental supervision and inspection.

In the final declaration of the Thematic Social Forum (Johannesburg, South Africa, November 2018) which brought together mining activists from all over the world, participants described the extractivist economy as a “destructive model based on the exploitation of so-called ‘natural resources’ and people of which mining is a prime case.” They demand the right of communities to say no to extractive activities on their territories, while adopting alternative ways of living.

Development and Peace-Caritas Canada supports their demands and, in light of the latest events in Brumadinho and of the countless violations of human rights that the mining sector has perpetrated throughout the years, strongly advocates for alternatives to extractivism that respect people and nature.