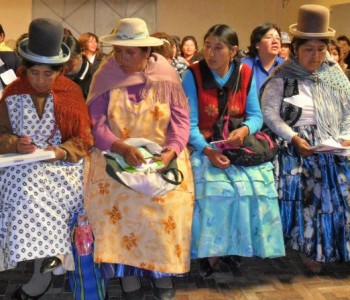 Bolivia became the fourth state on November 20 to formally ratify the new Convention 189 of the International Labour Organization (ILO) on Decent Work for Domestic Workers. Adopted by the ILO on 16 June 2011, the passage of Convention 189 has been celebrated by workers around the world as they expect the landmark measure to change the lives of at least 100 million workers globally.

“This new treaty will benefit 137,000 domestic workers in Bolivia,” said Development and Peace partner FENATRAHOB, the Federation of Domestic Workers, in a statement.

“With the ratification by La Paz of this international treaty, we will be protecting the minimum rights of domestic workers in Bolivia and in the entire world.”

Bolivia is the fourth country to ratify the treaty, (following Uruguay, the Philippines and Mauritius), and the fourth ratification triggers its entry into force for the 183 members of the ILO, including Canada. States who ratify the treaty commit to ensuring their domestic laws are in line with its provisions.
The treaty provides that domestic workers who care for families and households must have the same basic labour rights as those available to other workers: reasonable hours of work, weekly rest of at least 24 consecutive hours, protection from abuse or harassment, a limit on in-kind payment, clear information on terms and conditions of employment, and respect for fundamental principles and rights at work including among others freedom of association and the right to collective bargaining.

The ratification of this treaty is a significant milestone in the struggle of Bolivian organizations, led by FENATRAHOB, for rights and dignity of the domestic worker. Such workers come from poor rural environments and live in with wealthy families. In many cases, the domestic workers, usually women, lack education, and sometimes do not even speak Spanish. The vast majority come from the indigenous groups, a sector that has historically been marginalized by the mixed race elites who have economic control over the country.

FENATRAHOB’s first victory in this long struggle was the approval by the national legislature in 2003 of law 2450, which recognizes domestic workers’ basic rights. The current government of Evo Morales, which came to power in 2006, initiated a process of constitutional reform that has led to significant gains for the indigenous majority and the rights of women.

“The ratification of ILO 189 is an extra arm in the battle for justice for domestic workers,” executive member Prima Ocsa told Development and Peace in October 2012. “It means that our struggle is an international one.”

Bolivia: The impact of a mine on a community’s women
Read more