Back to Blama, Sierra Leone

In Field visits, News from our partners
June 20, 2012
by
Trevor Cook, Program Officer for Africa 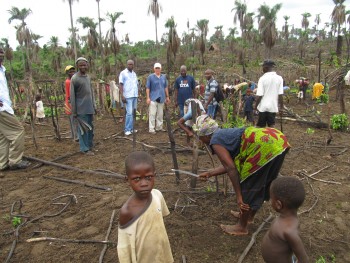 I first visited Blama in November, 1989.  It was my first trip as a program officer for Development and Peace.  After visiting the Pastoral and Social Center, where Development and Peace was funding an impressive leadership training programme called D.E.P. (Development Education Programme), I was taken by a group of YCS (Young Christian Students) graduates to see some of the villages where they were meeting and assisting people. These graduates had followed the D.E.P. program, which was based on an approach called Action, Reflection, Action.  One of the group members was Abu Brima, the agriculture training and project staff person at the Centre.  He was particularly enthusiastic about helping people to overcome their many challenges and problems, and I was very impressed.

Blama was a small village off the main highway between the major cities of Kenema and Bo.  I remember how the villagers explained how the YCS graduates had worked with them and helped them to discuss their situation, identify challenges and then work together to overcome them.  They talked proudly of some of their accomplishments.  Of course, in the presence of a white man from abroad, they produced a lengthy list of the types of support they needed to do even more to improve their village.

This was the beginning of the Network Movement for Justice and Development - NMJD - a partner that Development and Peace has supported from its inception in 1989 to present day. These young volunteer men and women had decided that they would apply the learning they received from the YCS and D.E.P. by going to villages and working with the people.

Here I am in Blama once again, twenty-two and a half years later.  It was my first trip with Development and Peace and now it is my last trip, as funding cuts at Development and Peace have led to my imminent departure as an employee.  Accompanied by NMJD staff and the regional Agricultural Officer, we spent an entire day with various community organizations, all involved in agricultural production.  With support from the Canadian Foodgrains Bank (CFGB) and with the skilled support of NMJD and the Agricultural Officer, these community groups have been involved in clearing dense bush, ploughing and preparing the land with only their hand-held tools and the determination to succeed.  Their accomplishments are as impressive as their commitment to working together to provide for their entire community.  I was thoroughly in admiration of their effort.

Of course the early work of NMJD was cancelled out by the decade long armed conflict in Sierra Leone, where various armed forces from rebels to national army, traumatized and terrorized the civilian population, committing some of the most horrendous violence and mutilation imaginable.  Finally, in 2002, and partly through efforts by NMJD and other civil society organizations, peace returned to the country.  People have struggled to rebuild their lives and return to a situation of peace and stability but the scars of the brutal conflict remain and are hard to overcome.

One group we met was composed entirely of women, many of whom were war widows.  They struggled to produce enough from their communal farm to feed themselves and also cover the costs of education for their children, healthcare, and other basic needs.  They, and many similar groups are benefiting from the support of NMJD, the CFGB and Development and Peace, who made all this support possible.

NMJD has grown from a small group of volunteer young people to Sierra Leone’s leading civic organization, working with villagers on the ground, fighting for benefits to the country from the extraction of natural resources, educating people on democratic practices that enabled two peaceful changes of government, protecting poor people from exploitation and abuse, creating greater equality between women and men and providing meaningful commitment and occupation for youth.

As I leave for Makeni and the next leg of the trip, there is a great sense of satisfaction and pride that so much has been accomplished over the years, and in spite of the lost years of the civil war.  This is indeed a great success story for Development and Peace.