In Advocacy, News from our partners
May 9, 2013
by
Kelly Di Domenico, Communications Officer 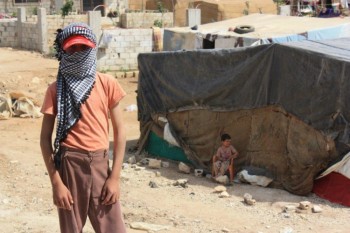 When 154 members of the United Nations General Assembly, including Canada, voted in favour of a universal Arms Trade Treaty (ATT) on April 2nd, 2013, it was a historic step towards instilling a culture of peace worldwide.

This treaty is the first international convention to regulate the global arms trade. Its purpose is to reduce the countless deaths and suffering caused by the transfer of conventional arms across borders by asking signatory countries to put in place standards for their international sale. This includes an assessment system that evaluates the risk that arms could be used towards war crimes and crimes against humanity.

This landmark treaty has been in the works for the last decade, and its passage is due, in no small part, to the tireless efforts of many organizations, including Development and Peace partner the Permanent Peace Movement (PPM) and Caritas Internationalis (Development and Peace is the Canadian member), through its permanent representative at the United Nations.

Both organizations are part of the steering committee of the Control Arms Campaign, a coalition of more than 100 civil society groups active in 120 countries, who came together in 2003 with the common goal to have this treaty become reality. The members of this alliance kept the treaty moving forward by being directly involved in negotiations. They took an active part in bringing as many states as possible on board, while ensuring the integrity of the treaty.

The direct involvement of civil-society in the treaty process was in itself a milestone. As states looked to civil society organizations for research and expertise to assist in their negotiations and widen support for many important provisions of the treaty, it demonstrated the importance of including civil-society in the development of international conventions like this one.

As a member of the steering committee, the PPM, a Lebanese-based NGO that fosters a culture of conflict prevention and peace-building in the Middle East through training, research and policy analysis, took a leading role in convincing Arab states to vote in favour of the ATT.

This treaty is of particular importance for the Middle East, where several countries have been arenas of conflict over the last decades. The PPM itself came into existence at the height of the Lebanese civil war of the 1980s, when university students joined to focus on building a peaceful future for the country. Since that time, the PPM has become a leading organization in conflict prevention and peace-building for the entire region.

Over the past year, Fadi Abi-Allam, the President and Executive Director of the PPM, travelled repeatedly to New York City to meet with U.N. state representatives who were undecided on their vote.  These meetings were enhanced by his interactions with state officials back in the Middle East.

Fadi says that he felt his role in the process was to bring the voices of victims to the United Nations and represent those who have suffered. He points to the current conflict in Syria, which so far has claimed an estimated 70,000 lives, as an example of how the irresponsible transfer of arms is having a deadly toll on the population.

In its years of work on the ATT, the PPM also brought together activists from 14 countries from the Middle East North Africa (MENA) region for regular conferences on the subject. Each time, attendees shared an update on the negotiation process, carefully examined the draft text of the treaty and discussed the position of each Arab country. At times, a representative of the Arab League was also present in order to enhance cooperation between regional NGOs and the Arab League as well as to develop a common strategy on increasing the involvement of states.

These efforts had a significant impact, with several Arab countries voting in favour of the ATT, despite strong resistance at the outset of the process, including Israel, Iraq, Libya and the United Arab Emirates.

The vote in favour of the ATT is an important success. However, its potential to greatly reduce the impact of armed conflict on civilians will depend on its future implementation. As of June 2013, the treaty will be open for state signature, and the Control Arms coalition will be looking to the states that voted in favour of the treaty – including Canada – to sign on quickly. The reason for this is that the treaty will enter into force 90 days after the 50th signatory ratifies it. Only then, can implementation begin at the national level. This ongoing and long-term process will again require strong collaboration between state and civil society, something the PPM is committed to.

The organization plans to follow-up with those Arab states that voted in favour to ensure they sign and ratify the treaty, and to monitor its implementation. “It is a long process, and a permanent one even, but we are fully committed to continuing our job,” said Mr. Abi-Allam, expressing that rather than take a pause in the face of this victory, it is motivation to keep going in order to protect human rights, human dignity and peace.