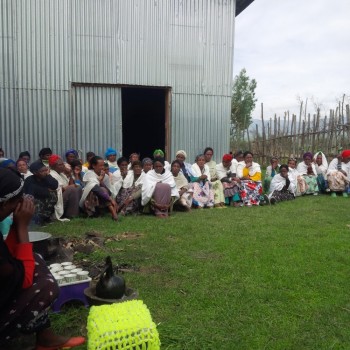 If you were an Oromo woman or girl living in the Kebele (neighbourhood) of Warqa Warabo before the days of Guidissa, your life might have looked like this: As a girl you experience female genital mutilation. As a widow you have no inheritance. You have no decision making power in your marriage and men in your village have the saying, “You can find a tall woman, but not a knowledgeable one.” You may take eggs or chicken to market to sell, but nothing larger. If you were to try and sell a goat or a cow, you would be looked on with suspicion and ignored. You are not allowed to plant by broadcasting seed or stand on the threshing ground, because men fear you will curse the crop. You have no involvement in community life and are confined to the home. You are poor and life is a struggle. But after the Guidissa, things are different.

Guidissa is the name of a woman’s self-help group in Warqa. It is an Oromo word meaning, “Helps to Develop.” It is one of four in this Kebele and consists of 38 women. Guidissa was organized through the work of a grassroots organization that our partner, the CST Joint Office, works with called Hundee. Hundee means “taproot” and they have acted as a taproot not only for Guidissa but for many other women self-help groups in over 31 Woredas (Districts) containing many Kebeles as part of the Civil Society Development Program supported by Development and Peace. We did not have time to meet and visit them all they are so numerous. Some of our group split off to meet another of these self-help groups. We met the women of Guidissa. Despite having to be at a funeral later that day, all 38 of them are there to talk with us, along with their men. The meeting opens with a blessing. In the past it would have only been a man to do this. Now a woman also takes part.

Key activities of a self-help group like Guidissa include a revolving loan program for their members as well as community conversations with the men to discuss the their challenges. The men recognize the value of the conversations. “Previously we were not aware of the issue of gender,” one says,  “Now with the engagement in the conversations, the awareness of our equality is there. The next generations can have hope.”

With the revolving loan program, women start by contributing a very small amount of money each week to the group, as little as 1 or even 2 Birr (Ethiopian Currency 20 ETB=1,2 CAD). When the pot is large enough, members can take turns accessing loans as high as 2000ETB, in some cases at zero interest. This credit has the power to change lives.

One woman in a blue headdress shares with us, “My husband was a farm laborer and because of our poverty I had to live with my mother. I had nothing and struggled to survive. I was not a member of Guidissa. My mother told me to join the group. I refused because I did not think I could afford the fifty cents (half a birr) to save each week as a member. But eventually my mother got me to join. I was able to get a loan and buy four sheep. I sold two of them and was able to get a land contract to farm. My husband was able to return and help me. Together we produced 4.5 Quintal (1Quintal = 100kg) of Teff (a local grain). I still had the sheep and I was able to buy a heifer and a bull. I fattened them and sold them and then bought two oxen to farm and a donkey. I have paid back the loan and I can generate my own income. I am free. My children are free.”

After we talk we go to the homes of Ejigua Hailu. She is a founding member of Guidissa and one of its first beneficiaries. I say homes, plural, because there are two on her property – the stick and thatched-roof one she lived in before Guidissa and the solid, tin-roofed one she lives in now. Ejigua has nine children and five grandchildren. Getting access to credit allowed her to progress economically. She was gradually able to own more and more sheep (which she fattened and sold) before going on to also owning a cow (which had just given birth two days earlier to a calf).

This is life after Guidissa as a woman.
It is not only economic capital that is the fruit here – it is social capital as well. There is no more HTP (Hurtful Traditional Practices). You can sell goats and cows freely at the market. You can sow & thresh. You can join the Kebele councils and most importantly, you are an equal decision maker with your husband.

Support for women is directly in the mission statement of Development and Peace. Today we saw that!

Redefining living together at the heart of Cambodia
Read more