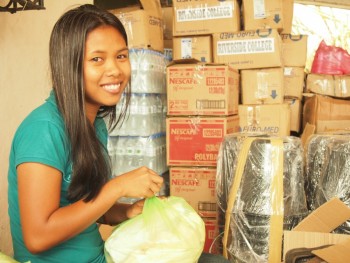 “Tacloban and the island of Leyte have received wide media coverage, but Panay Island mustn’t be forgotten,” said Father Mark Granflor, director of the Social Action Centre of the archdiocese of Capiz (the diocesan Caritas office). “Here too, families have been very badly hit and people are suffering. More than 147,000 people have been affected, and you only have to look around to see that people need help.”

In the coastal parts of Roxas City and in the town of Panay, both on Panay Island, fishing is one of the main economic activities. However, in addition to nearly all the houses being severely damaged, most fishermen have also lost their boats and nets. Yet, according to Father Mark, nothing seems to dampen their spirits.

“Yesterday, I met a fisherman and when I asked him if he needed anything he said no, and that everything was fine,” recounted Father Mark. “He’d lost his home and his boat, but a more fortunate neighbour lent him his own boat when he’d finished fishing. He was able to go fishing and bring back some fish for his family to eat, sell a little and start getting back on his feet.”

This is one of many stories that illustrate the courage and resilience shown by the victims of Typhoon Haiyan. “These people may have lost their homes and their clothes, but they haven’t lost their dignity,” added Father Mark.

The staff of the Social Action Centre have travelled to the remotest areas of the diocese to carry out an accurate assessment of the damage caused by the typhoon and the needs of the population.

Teams of volunteers were rapidly put in place to prepare bags of food items and clothing for distribution. Shella and James immediately offered themselves as volunteers. While James loaded two trucks with food to be distributed that day, Shella prepared bags of clothing for another distribution to take place the following day. “Helping my community does me good,” she said. “It makes me feel useful and takes my mind off what I’ve lost. There is always someone who’s lost more than you have.”

Once the trucks are loaded, they head off to a community a few kilometres from Panay Town. Along the way, farmers are already repairing their rice fields. “Agriculture is the second most important activity here after fishing,” explained Father Mark. The sector has also been badly hit by the typhoon, and while rice fields can be restored quite quickly, it will take years for palm trees and coconut palms to be productive again.

Standing where his wood and bamboo church once was, Father Jose Taz Lasola from the Padre Pio mission in Roxas City, looked emotionally at the destroyed statue of a saint. Nothing can be salvaged from the building.

“I didn’t want to leave my parishioners. But when the roof of my house was blown away and the wind shattered the windows, I had to get away,” he said. “But my community of 800 parishioners is strong and united. Families are busy building shelters in the remnants of their homes, but volunteers have already come to help me clear the debris. They want to rebuild their church. But first, families need to get a roof over their heads and resume work.”

People have gathered in front of the roofless church. Parish leaders have drawn up a list of 250 families in the community that need aid urgently. Each family will receive a bucket containing three kilos of rice and potable water.

The distribution takes place calmly until sunset. Families are grateful to leave with enough food to feed their families for two days. However, they would also like to receive aid to rebuild their homes, or at least have plastic sheeting and ropes to strengthen their temporary shelters.

The next day the same message echoes from the community of Linateran, a neighbourhood in the small town of Panay.

“I need a roof to shelter my family,” said Alex, a taxi driver who has come to get a bag of clothes from the distribution organized by the diocesan Caritas. With Prince, the young son he’s carrying in his arms, he said, “If we could rebuild our homes, then we’d be able to move forward. Conditions are currently very difficult, and I’m afraid my son might get sick.”

Several members of the community asked us to visit the neighbourhood with them in order to see the extent of the damage for ourselves. In front of her house in ruins, Myrna, a mother of four children, is trying to recover the nipas, the clusters of palm leaves that are traditionally used to make roofs.

“We’re still lacking everything, and we haven’t received any aid from the government,” she said. “But in our community we help each other out as much as we can. When one of has a little food, we share what’s left over with neighbouring families. But what can we do about our homes? We have no money to buy building materials, so we do what we can. All the aid you can bring us is welcome.”

This week, the Caritas network on site will receive 13,000 plastic tarps, which will be distributed in affected areas. They are in addition to the thousands that have already been distributed on the island of Leyte.

Despite the great solidarity that unites them, in many instances, the survivors of Typhoon Haiyan can only rely on international aid for hope of relief. And this aid has to be channeled to all regions affected by the disaster. That’s what Development and Peace, along with the other members of the Caritas confederation, is striving to do.