Activities in full swing thanks to your generosity 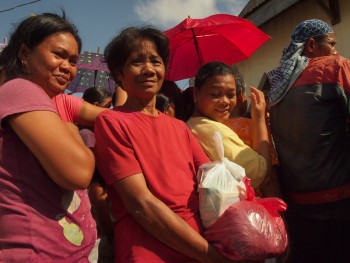 Development and Peace has increased support to relief efforts in the Philippines thanks to the outpouring of generosity from across the country in response to Typhoon Haiyan.

In the aftermath of the disaster, Development and Peace immediately began to collaborate with Caritas Philippines-NASSA, which is distributing food, water and other essential items in areas that were hardest hit by the storm. These include remote parts of the islands of Palawan and Panay, which have received less attention than other islands, yet still suffered enormous devastation. Development and Peace has just contributed an additional $1 million to the efforts of Caritas Philippines-Nassa as it continues to bring aid to the most vulnerable affected by this disaster.

International Programs Director Gilio Brunelli and Programs Officer Jess Agustin were recently in the Philippines to see how Development and Peace can best support relief work.

“We attended the Caritas confederation coordinating meeting with representatives from various Caritas organizations from around the world, including the nine dioceses affected by Haiyan. The purpose of the meeting was to assess where we are now in our relief/emergency assistance, the coordination, coverage of territories and to begin charting the next recovery phase, including long-term rebuilding work. It was amazing to be part of this global family that has responded in such a phenomenal and quick way to support Caritas Philippines-NASSA in its relief and emergency efforts,” explained Agustin.

Development and Peace is also working with Church World Service – Asia/Pacific in supporting the local organization People’s Disaster Risk Reduction Network, which is focusing on helping families return to their homes in the regions of Biliran and Eastern Samar. They are providing 2,500 families (approximately 15,000 individuals) with materials to rebuild their homes, as well as with household items that were lost in the storm, such as cooking utensils, cutlery and plates.

“Less than a month after Haiyan, we witnessed people rebuilding, cleaning, repairing… If not for the signs of massive destruction - the huge uprooted trees, roofless buildings, collapsed houses and schools, down power lines along the roads - life appears to be back to ‘normal.’ The courage and determination of the people to rebuild without waiting for someone to come and do it for them, and their gratitude, expressed in words and big smiles are awe-inspiring,” said Agustin.

All of these actions are made possible by the nearly $5 million in donations that have been received so far in solidarity with the victims of this natural disaster.

It is not too late to show your solidarity with those in the Philippines affected by this disaster. The Canadian government has extended the deadline for matching funds until December 23rd, and any donation by an individual postmarked by that date will be eligible to be included.