On this World Food Day, hunger remains an urgent concern in Yemen

On this World Food Day, we reaffirm our commitment to the most vulnerable people of Yemen. Development and Peace — Caritas Canada is supporting a project that provides basic rations of flour, beans, oil, sugar and salt to 1,100 vulnerable families in the war-torn Harib Al Qaramish district of Yemen. The project, led by the Adventist Development and Relief Agency, is financed through the Canadian Foodgrains Bank and backed by the Government of Canada.

A crisis of alarming proportions…

More than a year ago, the United Nations had reported that 8.4 million Yemenis faced severe food insecurity and were at risk of starvation. The UN Humanitarian Affairs chief, Mark Lowcock, had cautioned, “If conditions do not improve, a further 10 million people will fall into this category by the end of the year.”

His warning having gone unheeded, the situation in Yemen “almost certainly may break down further,” according to UN Special Envoy Martin Griffiths. Of the intractable civil war, Griffiths says, “Every additional day of the conflict adds to the total of the tragedy and the misery.”

In 2011, an Arab Spring uprising replaced Yemen’s autocratic president Ali Abdullah Saleh with his deputy, Abdrabbuh Mansour Hadi. The new president’s hand was weakened by a flagging economy, a failing agricultural sector and uncooperative security forces. This allowed the long-restive Houthi rebels to capture vast swathes of territory in the north. By early 2015, they had taken the capital, Sanaa; forced President Hadi to flee; and begun winning support from beyond their traditional minority Shia Zaidi base.

In March 2015, after a Houthi leader threatened to invade Saudi Arabia, the deposed president appealed for the Saudis’ help. Unwilling to brook the rise of a Shia force purportedly backed by Iran, Saudi Arabia led a coalition of Gulf states in air strikes on Yemen. With British, American and French backing, that campaign hoped to reinstall President Hadi in a matter of weeks. 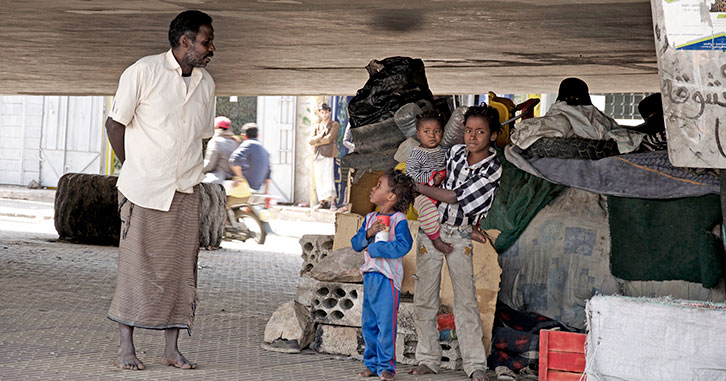 More than four years later, barring fleeting cease-fires, the internal conflict and the aerial bombardment rage on. Millions have been displaced. Hundreds of thousands have been stricken with cholera and millions are facing starvation. There is no functioning economy left to speak of and the woefully inadequate humanitarian aid that does reach the country can often not even reach its intended recipients because of the worsening security situation.

In addition to helping address their urgent need for food, Development and Peace has a sustained commitment to supporting the people of Yemen so that they can live in dignity. Convinced that complex problems of the kind faced by Yemen require patient, holistic peacebuilding, we are forging partnerships with local organizations that work to bring communities together in creating an aware, engaged, peaceable and vibrant citizenry. This work, however, is time-consuming, often dangerous and always resource-intensive. We cannot sustain it without your generosity.

Responding to conflict and climate change in Somalia
Read more

Thanks to Development and Peace – Caritas Canada donors, $3.8 million to be put towards relief efforts in Africa and Yemen
Read more