What happens when the lungs of the Earth are on fire?

An aerial view of deforestation in the La Pampa region of the Peruvian Amazon.

The Amazon forest, which provides 20% of the oxygen we breathe, is burning in front of our eyes. As Development and Peace-Caritas Canada prepares to launch its new campaign, For our Common Home: A future for the Amazon, A future for all, which highlights the importance of protecting the Amazon and its peoples, and as the Church around the world prepares for the October Synod on the Amazon in Rome, the urgency of taking action to protect the remaining Amazon forest is undebatable.

In a statement released on August 22, 2019 by CELAM (the Latin American Episcopal Council), the Latin American bishops emphasize the significance of the Amazon to the entire world, and “the seriousness of this tragedy, whose impact is not merely local, or even regional, but planetary in scale”. They are calling on the governments of the Amazon region, the United Nations and the international community to "take serious measures to save the lung of the world" as thousands of fires continue to devastate the Amazon rainforest in Brazil.

Development and Peace-Caritas Canada is very concerned about the safety of our partners working in the region, and about the safety and the futures of Indigenous peoples and other traditional people who live in the regions affected by the fires. They are on the frontlines of the struggle to protect the Amazon basin, which in turn protects the Earth’s climate.

Since the election of the president of Brazil, Jair Bolsonaro, deforestation in the Amazon has increased significantly. His government has been striking down laws which protected Indigenous and traditional territories from resource exploitation, and has been openly attacking and criminalizing human rights defenders, indigenous peoples, and social movements who wish to protect the Amazon and its peoples. This political context has emboldened loggers, miners, ranchers and industrial agriculture companies to invade protected territories, and intimidate Indigenous communities.

In a letter issued on Monday, August 26, 2019, our Brazilian partner organization, the Comissao Pastoral da Terra (CPT), which documents conflicts and violence related to land in the Amazonian region, states that “new rules that favour land grabbing, in addition to other government actions that encourage crime…have caused panic and fear to social groups across the Amazon. The consequence of these actions has been the frightening increase in fires set by landgrabbers, which cause the forced displacement of Indigenous people from their territories, and turn the Amazon forest into ashes.”
The CPT calls on us to urge our government to put diplomatic pressure on the current Brazilian government to protect the Amazon, and to make our trade relations conditional on the protection of the Amazon.

The exploitation of resources in the Amazon is driven by a global economy based on overconsumption, at a rate that threatens the future of our planet. Each of us has a role to play in reducing our consumption, and supporting fair, sustainable alternatives, which will preserve our common home for future generations. 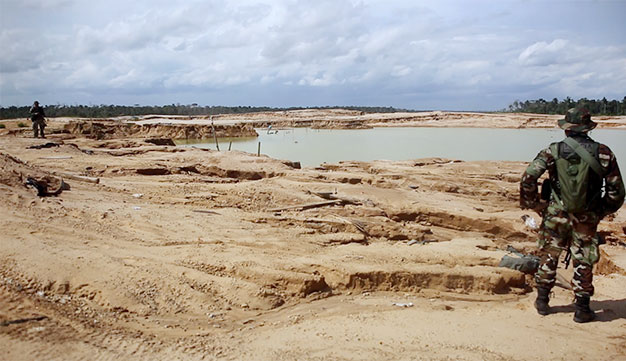 Development and Peace-Caritas Canada has been campaigning on climate justice, on corporate responsibility and accountability, and on human rights for many years, and the urgency of this work is being proven as we watch with horror and grief as the Amazon forest, and other forests around the world, burn. To learn more about our campaign For our Common Home, and how you can take action to protect it, visit: https://www.devp.org/en/education/fall2019/materials.

Defending the Amazon is now a burning need
Read more

Make a difference on climate change: send a message to our partner Labor in Peru!
Read more