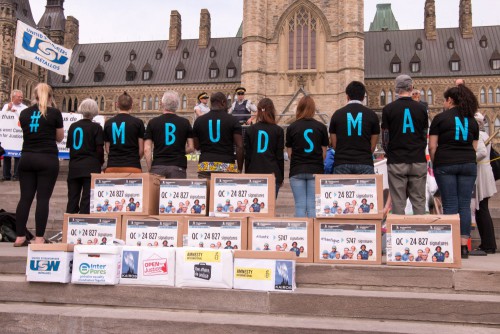 On Wednesday, October 1st, Bill C-584 or An Act respecting the Corporate Social Responsibility Inherent in the Activities of Canadian Extractive Corporations in Developing Countries will be voted on as part of its second reading in the House of Commons. This act proposes the creation of an independent ombudsman in Canada, a call that has been made by Development and Peace since 2007 in response to reports that communities affected by Canadian mining companies have not had their rights respected. Development and Peace reiterated its call for an ombudsman last fall, when it launched its campaign A Voice for Justice. Through this campaign, over 85,000 signatures were collected in favour of the creation of an ombudsman.

This act is a step forward in ensuring that communities in the Global South have their rights respected by Canadian mining companies and benefit equally from their own natural resources. We encourage you to send an email to your Member of Parliament as soon as possible using the draft letter below, to ask your MP to vote in favour of this bill.

By moving to a third reading, the bill will be studied by a committee which will allow for experts to testify and contribute towards improving the bill so that it best responds to the concerns of communities in the Global South impacted by Canadian mining companies.

You can find the name and email address of your MP here.

Thank you for taking action today and helping to bring forward a Voice for Justice!

Once again, corporate accountability of the extractive industry is compromised
Read more