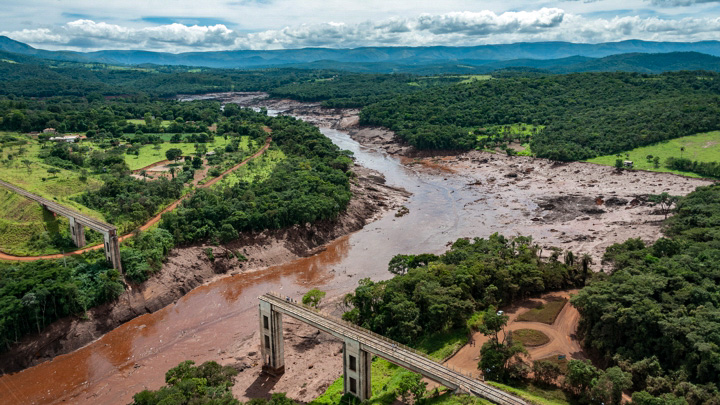 Development and Peace — Caritas Canada welcomes the statement on Brazil issued by Baskut Tuncak, the United Nations Special Rapporteur on the implications for human rights of the environmentally sound management and disposal of hazardous substances and wastes.

Acknowledging the country’s limited progress on toxic waste disposal, Tuncak observed, “There exists an urgent need for the human rights of many vulnerable groups to be respected, protected, and fulfilled from the threats posed by toxic substances and hazardous wastes in Brazil.”

Bringing the watchdog to the frontlines

Last year, after decades of exposing and opposing rampant pollution by the mining and industrial agriculture sectors, Brazilian civil society organizations, including many Development and Peace partners, were encouraged by news that the Special Rapporteur was planning a mission to Brazil. By the fall of 2019, however, they learnt that industry lobbyists were trying to dissuade Tuncak from actually visiting affected communities. Our partners decided to respond by stepping up advocacy.

Accordingly, on November 27, 2019, Development and Peace’s Brazil programs officer, Anne Catherine Kennedy, wrote a letter to the Special Rapporteur, urging him to visit the community of Piquiá de Baixo, in the State of Maranhão.

Piquiá de Baixo is a microcosm of much that ails Brazil. In 2011, our partner, Justice on Rails (Justiça nos Trilhos), coproduced a report on the human rights impacts of steelmaking and mining, particularly by the giant Vale S.A. company in Califórnia and Piquiá de Baixo.

Vale’s 66 charcoal furnaces and five steel plants, along with the transport of raw materials and finished product in the region, were causing a host of problems. These included deforestation; land, air and water pollution; fatal industrial accidents; chronic health problems including respiratory, eye and skin conditions; urban squalor; impoverishment; and the repression of citizens’ rights.

The report criticized Vale for its abuses and the state for not enforcing standards or protecting the people. In her letter to Tuncak, Kennedy noted that “Eight years later, the Brazilian state has failed to adopt the recommendations of this report….” She emphasized that with nothing having been done to curb pollution, the people continued to suffer the effects of toxic exposure.

It is a measure of the effectiveness of this advocacy that during his Brazilian tour from December 2 to 13, 2019, Tuncak visited pollution-hit communities with whom our partners work in Piquiá de Baixo, Belo Horizonte, Brumadinho, Imperatriz and São Luís.

Brazilian mining made the headlines on January 25, 2019, when the collapse of a Vale-owned iron ore tailings dam near Brumadinho killed more than 250 people and exposed 1.3 million living downstream to acutely toxic pollutants. Key leaders of Vale, which was also implicated in the Mariana dam disaster that killed 19 and poisoned an entire river basin in 2015, now face homicide and environmental crimes charges.

Toxic pollution is not restricted to the mining sector. Across vast stretches of Brazil, pesticides used in industrial agriculture are endangering the health, livelihoods and social lives of hundreds of rural, traditional and Indigenous communities.

In their quest for social, economic, ecological and legal justice, these communities have the steadfast support of many of our partners. Their concerns are validated by the Special Rapporteur’s findings.

“On a steep path of regression”

Pending a full report due in September 2020, Tuncak issued a strong statement right after his visit, saying, “Brazil is currently on a steep path of regression, heading towards an increasingly toxic future.”

About the Brumadinho disaster, he said, “I have never seen or heard trauma to the extent of what this community is experiencing.” He harshly criticized the state's regulatory and enforcement failures.

Based on testimonies and studies, Tuncak concluded that “individuals and communities are facing grave violations and abuses of human rights to life, dignity, health and bodily integrity from toxic pollution.”

Tuncak cited several instances of the government appearing to serve powerful corporate interests; deny people their right to information; and thwart, marginalize or criminalize human rights and environmental activists. This gave many culprits what he called “a well-founded sense of impunity.”

A note of hope

Tuncak recognized Brazil as “a leader in the constitutional recognition of environmental rights.” Holding the state to account for upholding those rights is a vast network of civil society organizations, many of whom are partners of Development and Peace. To Tuncak, they are the ones “whose resilience must be recognised and emulated.”

While they await Tuncak’s final report, these vanguards of Brazilian democracy, with Development and Peace’s ongoing support, will continue defending the rights of oppressed and marginalized people and Indigenous and traditional communities. Our ongoing For our Common Home campaign offers you, too, an opportunity to stand in solidarity with them.