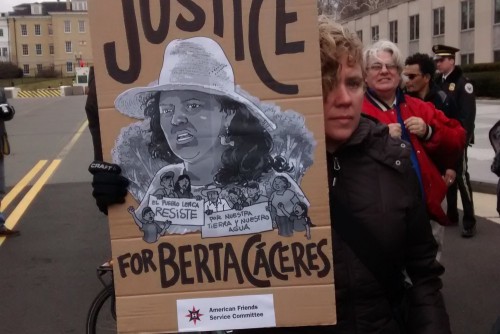 Development and Peace adds its voice to those of its Honduran partners in the unequivocal condemnation of the abhorrent assassination of Berta Cáceres, president of Coordinating Group of the Civic Council of Popular and Indigenous Organizations of Honduras (COPINH), in the early hours of March 2nd, 2016. In the face of such a tragic loss - not only for Berta’s family and friends, but also for the movement of defenders of human rights, territory and the environment - Development and Peace sends its condolences to and expresses its solidarity with all those in Honduras affected.

The assassination of Berta, a leader of the persecuted Lenca indigenous people and laureate of the prestigious Goldman Environmental Prize, leaves no doubt of the dangers faced by all those who defend human rights and the environment in Honduras. “Her murder shows and exposes the vulnerability of people and organizations struggling for human rights and the defence of natural resources, and against the handover of our national sovereignty,” reflected Father Ismael Moreno SJ, director of Fundacion ERIC, a Honduran partner of Development and Peace.

Berta’s family has expressed its wish that the international community form a commission of experts to carry out an in-depth investigation into this murder. The government of Honduras must cooperate with such an investigation, whose mandate should include to seek to clarify who planned and paid for this deed.

Development and Peace deplores the failure of the Honduran state to ensure the protective measures (medidas cautelares) for Berta that were required of Honduras by the Inter-American Human Rights Commission, in recognition of her status as a seriously threatened human rights defender.

Development and Peace also calls on Honduras to guarantee the security of Gustavo Castro, a Mexican citizen and renowned environmental activist, who was a witness to the crime and whose life is now seriously under threat. The international community, including Canada, must take steps to protect the life of this vital witness.

Through her work as director of COPINH, Berta also worked directly with the National Coalition of Environmental Networks and Organizations (CONROA), another Honduran partner of Development and Peace. CONROA feels that the murder of Berta is a disconcerting message to its member organizations to demobilize and halt their defence of indigenous territories that are threatened by mega development projects.

In memory of Berta, Development and Peace reaffirms its solidarity with all Hondurans working to defend natural resources and the rights of indigenous peoples to their land. It calls on the Honduran government to live up to its duty, under international and Honduran law, to protect the lives of those who defend human rights and the environment.