Syria: why people flee and why they need protection 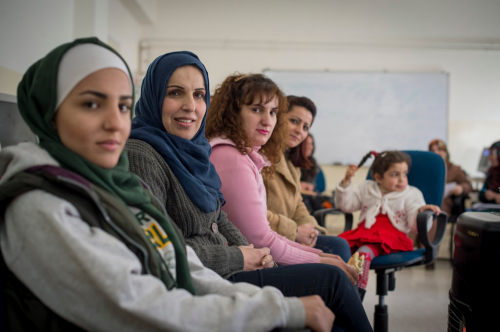 Here is an interview with Father Nawras Sammour, SJ, director of the Syria office of Jesuit Refugee Service (JRS), which is one of our privileged partners in the region. The organization does an outstanding job helping Syrian refugees in Turkey, Jordan, Lebanon, Iraq and displaced persons in Syria. Last year, when he visited our office, he recounted the suffering of Syrians, and in this interview he explains why Syrians continue to flee, why they need legal and secure means to seek asylum in Europe, and above all, why they desperately need peace in order to rebuild their lives and their country.

What are people’s daily lives like in Syria right now?

Outside of the besieged areas, it is the capital of Aleppo that is suffering the most because everything is lacking. It is almost impossible to purchase anything. Most families depend on aid from different organizations. Everyone suffers from malnutrition.

People live in constant fear of mortar attacks. Mortars can hit anywhere, which is why people are afraid to send their children to school and why people stay at home. Following the shelling of the Christian neighborhood of Aleppo, people took refuge in shelters. They lost everything and they have to pay between 20,000 and 30,000 Syrian pounds to rent a 1- or 2-room apartment (between $106 and $159), which represents the average salary of a teacher.

People have sold everything to survive: rings, jewelry, accessories and cars. Those who had savings are now short of money. People can no longer pay for daily necessities and are therefore forced to move. Some families have decided to wait until the end of the school year, as is also the case for university students, but many people have chosen to leave.

Homs is the “calmest” city for displaced persons who want to return. Many people, having lost everything, cannot rebuild their homes because of a lack of money and do not return.

Getting around the city is difficult. During the day, children can go to school, although schools are crowded and most schools in large cities have been damaged by mortar fire. At night, however, it is better not to go out; insecurity prevails and there is a risk of being kidnapped.

In Damascus, every day there are at least 16 hours without electricity. Life here is also very expensive. Food is as expensive as in other cities in Syria. We have clean water every two or three days, so we manage to survive.

Schools and universities that are not damaged continue to operate. But a few weeks ago, ten students were killed by mortar fire at the Faculty of Engineering of Damascus University.

Battles take place near the centre of Damascus. The highway to Homs has been severed, so people have to make a detour to go there.

Tell us about the displaced?

To survive people regularly go to Damascus and the coastal regions. Most people flee the areas controlled by the group calling itself the Islamic State (ISIL) because it is impossible to live there if one does not accept their ideology. Hardly anyone can live among them. Moreover, these areas are frequently bombed, which creates insecurity.

What hope is there for the future?

We are experiencing a period of uncertainty. But one thing is certain: Syrians cannot solve this problem on their own. Peace must be addressed regionally and internationally. No Syrian citizen can resolve the current situation. People are exhausted. The conflict exceeds Syria’s problem-solving capabilities.

Who should participate in the negotiations?

All actors must be able to participate. We cannot exclude anyone except those who exclude others.

Can the Church play a prophetic role?

I think the prophetic character lies in small gestures and small initiatives. People of good will do many things. Many communities and organizations, other than JRS, provide basic commodities and food for the most vulnerable. Young religious and secular people are committed to serving others. Since the beginning of the war, we have witnessed the birth of small groups and small initiatives. Today, the difficulty of the situation means that they are less numerous, but there are still some.

What is your vision for Syria?

Syria will never be the same. A new Syria is coming into being. Let us do everything in our power to help Syria renew itself, based on its own history, and be welcoming to all, as it has always been. I hope the new Syria will emerge in all its splendour as a bridge between East and West, a multicultural and multi-religious place, as it was before the war.

This is my hope. In this globalizing vision there is no place for those who exclude others.

The interview was done by Amaya Valcarcel, Head of Advocacy at JRS International.