As Syria burns, why is the world not doing more? 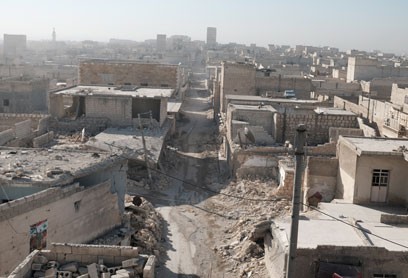 In the last few weeks, the war in Syria has taken on new and frightening proportions as the besieged area of eastern Ghouta has become the theatre of horrific violence that has trapped 400,000 civilians without access to medical or humanitarian aid. As attacks are intensifying, at least 45,000 Syrians have been forced to flee their homes, while those left behind face an uncertain fate.

This tragedy is unfolding as we mark seven years since the war in Syria started. The fighting in eastern Ghouta, where an estimated 1,000 civilian women, men, and children have been killed in less than a month, is a stark reminder that this war is far from over. Civilians take refuge in tunnels to escape air strikes and bombs. Hospitals and civil defence centres are targeted by these strikes, so that those injured cannot be treated and those stuck under the rubble cannot be saved.

There are fears that the scenes in Gouta will be repeated in other contested parts of the country. Already, the Kurdish city of Afrin has been taken over by Turkish forces, causing the displacement of over 100,000 people, while East Aleppo and Idlib are threatened by escalating waves of attacks as government forces aim to regain decisive control by any means. We are concerned that through this “surrender or die” strategy, crimes against humanity are being committed.

Pope Francis has called for an end to this “inhuman” situation which violates the human dignity of Syrians. The international community has not only a moral, but also a legal obligation to stop that from happening.

On February 24th, the United Nations Security Council, including Russia, voted in favour of a month-long ceasefire. However, certain concessions have allowed fighting to continue and global leaders are still faced with the suffering of civilians who have little to no access to aid or even the ability to leave, as the security of civilians in evacuations is not always guaranteed.

The international community must act to end this war. Humanitarian and medical aid should be allowed to reach the most vulnerable and there needs to be a firm commitment to bring a political end to this conflict. Development and Peace continues to work with multiple partners in Lebanon, Jordan, Turkey and Syria, including Caritas Lebanon and Caritas Jordan with support from Global Affairs Canada, to respond to the needs of refugees and the most vulnerable in Syria, as well as to support peacebuilding initiatives.

We are concerned for the safety of the women and men who are working at our partner organizations in besieged areas of Syria and the people they are courageously helping.

Our partner PAX, a peacebuilding organization that is working with young leaders in conflict-affected communities to promote inclusiveness and peace, has sent an urgent reminder to the international community to embody its role in ensuring that UN resolutions are respected, to act as a monitor so that international law and the rights of civilians are respected, to support post-war initiatives that focus on reconciliation and do not reinforce sectarianism and to ensure that war crimes are investigated and prosecuted.

Tell the Prime Minister to act for peace in Syria

Since the war in Syria began in 2011, more than 470,000 people have lost their lives and according to the United Nations High Commissioner for Refugees (UNHCR):

Today, as eastern Ghouta and other areas face mass devastation and bombs rain down on civilians, the world must act. In confronting past horrors, the world has said never again. Now is the time to turn these words into action.

Sign our petition calling on the Canadian government to:

Please pray for the people of Syria

Almighty eternal God, source of all compassion,
the promise of your mercy and saving help fills our hearts with hope.
Hear the cries of the people of Syria;
bring healing to those suffering from the violence,
and comfort to those mourning the dead.
Empower and encourage Syria’s neighbors
in their care and welcome for refugees.
Convert the hearts of those who have taken up arms,
and strengthen the resolve of those committed to peace.

O God of hope and Father of mercy,
your Holy Spirit inspires us to look beyond ourselves and our own needs.
Inspire leaders to choose peace over violence
and to seek reconciliation with enemies.
Inspire the Church around the world with compassion for the people of Syria,
and fill us with hope for a future of peace built on justice for all.
We ask this through Jesus Christ, Prince of Peace and Light of the World,
who lives and reigns for ever and ever.
Amen.

For the people of Syria, that God may strengthen the resolve of leaders to end
the fighting and choose a future of peace.

We pray to the Lord…

[This prayer is adapted from Catholics Confront Global Poverty, a collaborative effort of USCCB and Catholic Relief Services.]

Development and Peace is working with partners in Jordan, Turkey, Lebanon and Syria to bring much needed aid to those most affected by this conflict and to support peace in the region.

Government of Canada renews support for Development and Peace to deliver humanitarian aid in Syria, Jordan and Lebanon
Read more