Sudan: Hospital supported by Development and Peace target of bombing 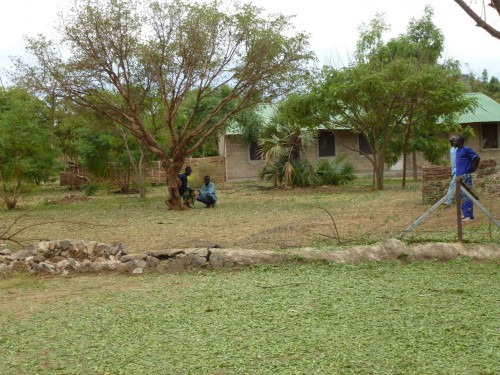 The Mother of Mercy Catholic Hospital in the Nuba Mountains of Sudan was the target of repeated bombings by the Sudanese Government late last week. The hospital, which is located in the conflict-ridden region of Southern Kordofan near the border with South Sudan, is the only medical centre in the area.

Seen as a safe haven in the region, the hospital had become an integral part in the life of the community, with people frequently gathering on the hospital grounds to socialize and partake in other activities. Sadly, that sense of security was shattered by bombs that were dropped in and around the hospital late last week.

“There was about a two-second warning between hearing the plane and the bomb falling - only just enough time to get down on the floor. The office shook with the impact and our vision became blurry with the dust and bits of cement flying in the air,” said Ingrid Revaug, Emergency Project Coordinator at the hospital. Drone flights seen a few days prior to the bombings suggest that the attacks were planned.

The hospital is run by the Diocese of El Obeid, which is one of the few institutions capable of providing aid in the Nuba Mountains, after most international relief organizations were banned from operating by the Sudanese government. Rt. Rev. Max Gassis, Bishop Emeritus of the diocese, called the attacks “a crime against humanity” and called on the Government of Sudan to protect the hospital from further bombing.

“The sick have nothing to with the conflict that has devastated the Nuba Mountains since June 2011. They are innocent civilians protected by international law from direct targeting by military forces. International law demands that civilians are protected during conflict, but the attack today is a direct violation of this fundamental humanitarian principle. It is a violation of the sacredness of all human life, which we must protect at all costs,” he said in a statement released to the press.

The region of South Kordofan has been the site of brutal conflict since 2011, when South Sudan became its own country. Since then, regions along the border have been under dispute, including oil-rich Abyei which is currently stateless, and Kordofan, which remained part of Sudan, despite strong ties with the South. This has lead to conflict between the Sudan People's Liberation Movement-North (SPLM-N), and the Sudanese government, causing the displacement of thousands of people.

The hospital provides medical assistance to 150,000 people each year. Although the hospital was not severely damaged, and none of its patients or staff were injured, the hospital was evacuated, leaving thousands vulnerable to disease and illness.

“The patients of the male ward have started to trickle back, but the female and children’s ward are still nearly empty. Everything is eerily quiet and covered in a fine layer of dust,” added Ingrid. “We are praying that this does not mean the end of our relative peace, but I must admit that it feels like it is the beginning of a nightmare.”

Development and Peace has been supporting activities at the hospital since January 2013, including the provision of health care services, the construction of latrines, and the distribution of sanitation and hygiene items, such as soap and jerry cans to transport water.

Development and Peace strongly supports the diocese’s appeal to the Government of Sudan to ensure the safety of the innocent patients at the hospital and to find a peaceful solution to the conflict. Our thoughts and prayers go out to the hospital staff and patients. A video report on the bombing can be seen here.