South Sudan: Conflict and hunger shatter the dreams of those who came home 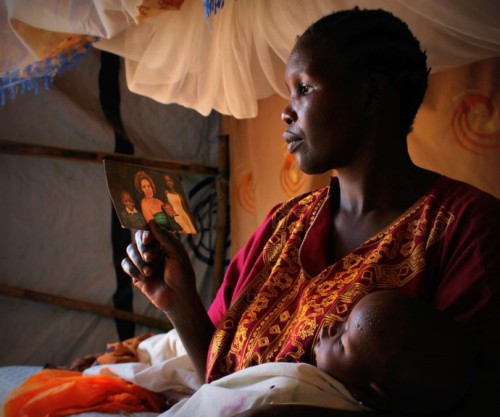 Zainab Rahma looks longingly at a photo in her hand. In it, she sits proudly with three of her children.

“This was just five years ago. Look how beautiful I was. We were happy. This was our life,” she says.

At the time, she was living in Uganda as a refugee due to violence in the southern region of Sudan, where rebels were fighting for independence from the Government of Sudan in Khartoum. She was separated from her husband who had stayed in Juba, now the capital of South Sudan, to work. Yet, despite these difficult circumstances, in retrospect, it seemed like a happier time.

Today, Zainab, who is only 30 years old, is a widow raising six children alone and living in a United Nations camp for displaced families on the outskirts of Juba. She is there with 20,000 other South Sudanese who have fled their homes due to conflict.
Since political clashes began in December 2013, 1.5 million people have been displaced in the country, some even hiding in the bush in fear of attacks.

For a nation already scarred by years of violence in its struggle for independence, these latest clashes have had devastating consequences. The crops on which the majority of the population depend for food have not been planted, and sources on the ground are warning that the country is heading towards the worst famine since the 1984 famine in Ethiopia. Already, children emaciated by hunger are appearing at health clinics across conflict-ravaged regions in the North of the country in need of treatment

And with the country’s leaders refusing to agree on terms for peace, it appears the situation will only deteriorate.

At the camp in Juba conditions are harsh but at least some services are available. The Daughters of Mary Immaculate (DMI) Sisters, in partnership with Development and Peace, are distributing food items and providing psycho-social counselling to families.

Zainab cradles her four-month-old daughter Madelina in her arms, her daughter’s petite body drenched in sweat from the midday heat. Madelina will never know her father, who was killed almost six months ago in the violence brought on by the conflict.

For Zainab, she never imagined that her own country would hand her such a cruel fate. The country’s independence in 2011 was a moment of jubilation, when she could finally return to her homeland and be with her husband.

“That day, my husband called me. He was so happy he couldn’t talk,” she trails off, laughing heartily. “He was like a little boy. We talked about the children and made plans for us to return to Juba. We were coming home.”

A few months later, the reunited family began to settle into its new life in Juba.

“We had a roof over our heads, food to eat, good education for the children and even dreamed of saving for the future,” she smiles faintly, staring into the distance.

As bleak as the future seems, Zainab remains strong for her children, hopeful that they will one day know a peaceful South Sudan.

“I see my daughter’s smile and I choose to live,” she says.