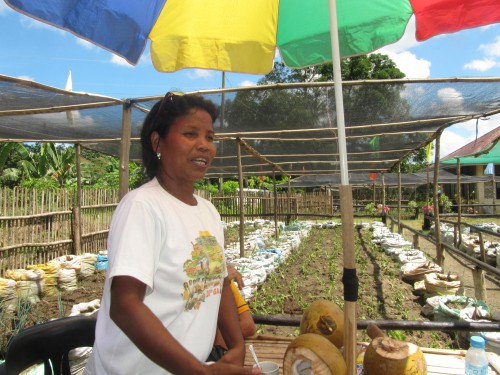 Agrarian land reform has been a hard struggle in the Philippines. At a certain time, it was estimated that 10% of the population controlled 90% of the land. A land redistribution program was put in place to try to create a fairer reality. Although this reform has been ongoing for two decades, it has been a long and slow process. And even when peasant farmers eventually receive a plot of land, it is difficult for them to make the land profitable enough to support their families. Some eventually abandon the land to try their hand at other ventures.

Marcelino Octaviano understood the ardours of being a farmer all too well. Tilling a family plot of 1.5 hectares was proving insufficient to sustain his family so he took a second job as an electrician. Still, he could barely make ends meet.   However, this precarious existence changed when Mr. Octaviano joined the Balugo Farmers Multi-Purpose Cooperative (BFMPC), a small cassava cooperative receiving support from Development and Peace partner Agri-Aqua Development Coalition- Mindanao (AADC).

The AADC was founded in 1994 as a coalition of 120 community organizations to address issues affecting the rural poor in Mindanao. It works to build coalitions around specific issues, provides technical training and helps to build capacities within local groups. In 2002, it made a decision to promote community economic development in the region as agricultural and fishing revenues were falling. This strategic decision was steeped in the belief that small-scale farming could be sustainable and a viable option to improve livelihoods. It began to help organize and provide support to cooperatives, including the BFMPC. To help increase the productivity and revenues of the cooperative, AADC facilitated a negotiation for BFMPC to supply cassava to the San Miguel Corporation, a food and beverage company. This meant that farmers could pool a portion of their crop to sell to the corporation, while saving some for their families and to sell at the market.

AADC has also built a plant to transform bananas into snack food and another for the transformation of coconut into oil.

For Mr. Octaviano, being part of the BFMPC has transformed the living standard of his family. Today, he is the manager of the cooperative. He has benefitted from business training from AADC and continues to expand on his learning. And the prospects for his children seem even brighter: his two daughters are now enrolled in university.