Relief for refugees, help for host communities: field notes from a Rohingya refugee camp in Bangladesh

The Rohingya are a Muslim ethnic minority residing mainly in Rakhine State in the north of Burma (also called Myanmar). Persecuted and marginalized in their own country for decades, the Rohingya are considered stateless and have neither Burmese nationality nor freedom of movement in the country. On August 25, 2017, violence erupted between the Arakan Rohingya Salvation Army (ARSA) and the Burmese army in Rakhine state. Between August and October 2017, more than 600,000 Rohingya fled Burma in fear of being subjected to brutal actions by the Burmese army that the Canadian government has recognized as constituting genocide. Most of them live in Bangladesh, in what has become the world’s largest refugee camp. Development and Peace’s humanitarian assistance programs officer, Dominique Godbout, recently visited the camp and filed this report.

As I walk through the Kutupalong-Balukhali camp in Bangladesh’s Cox’s Bazar district, I’m encouraged by the progress that Rohingya refugees have made since fleeing targeted violence in Burma two years ago. The scaling-up of humanitarian assistance has turned settlements that spontaneously sprang up on empty fields into organized camps with infrastructure and services. Rohingya day labourers have contributed to improving their living conditions by building water wells, latrines, bamboo bridges and drainage canals, and installing solar streetlamps.

From the onset of the crisis, Development and Peace — Caritas Canada and its local partner, Caritas Bangladesh, sought to maintain the dignity of Rohingya refugees by providing basic necessities such as mosquito nets, solar lamps and umbrellas. To circumvent the need for firewood and avert deforestation, we provided modern cooking stoves that use safer, more reliable fuels. Makeshift shelters were replaced with semi-permanent structures designed, in line with the refugees’ recommendations, to be more comfortable, durable and weather-resistant.

In the camp, I met a refugee who was building mid-term shelters and asked him what he did with the little money he earned. I also asked what it felt like to build a house that he would not live in and that was more comfortable than his own. His answer was touching. “I buy food with the little money I receive because the United Nations rations are not enough to feed my family,” he said, adding, “It fills me with joy and pride to know that a family more deprived than mine will be able to live in better conditions, thanks to my skills.” 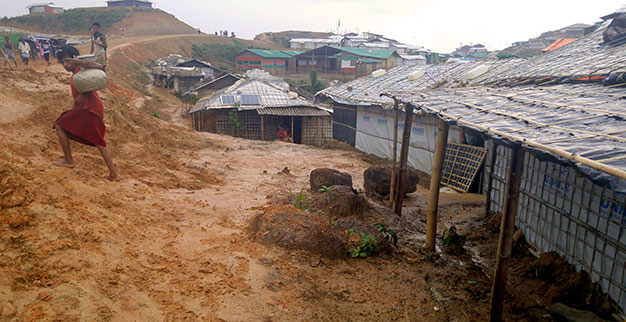 2018 - Temporary shelters built shortly after the arrival of Rohingya refugees

However, despite this progress, the situation of the more than 900,000 Rohingya living in the world’s largest refugee settlement remains extremely vulnerable. Basic services such as water, health, sanitation and shelter are overstretched. The people are at acute risk of human trafficking, sexual and domestic violence and disease outbreaks. They are deeply affected by the extreme violence they experienced in Myanmar and by the daily stressors of refugee life. Their poor living conditions are exacerbated by inclement weather, especially during the monsoon from May to September.

The situation of the Bangladeshi communities hosting the refugees is not much better. Cox’s Bazar, with a population of 2.3 million, is one of the most vulnerable districts of Bangladesh. The locals struggle to cope with extreme poverty, high population density, frequent natural disasters and climate change.

Around the camp, the Rohingya outnumber their Bangladeshi hosts by two to one. In meeting a group of women from the host community, I was struck by how much harder life has become for their families since the refugees arrived. They are now competing with the refugees for natural resources such as land, water, fish and firewood and for commodities and services, especially labour, education, health and transportation. Despite some efforts to support host communities, most feel that far less aid is reaching them than reaches refugees, which is fuelling growing resentment. The situation is likely to worsen if these tensions and divisions are not addressed. There is therefore an urgent need for a more holistic response that includes both Rohingya refugees and local Bangladeshi communities as stakeholders.

Mindful of this need, Development and Peace has worked with Caritas Bangladesh to develop a comprehensive response that focuses on helping the most vulnerable host families, particularly women-headed households, enter the labour market through a combination of cash-for-work initiatives; agriculture and home gardening training; and training and support for small business development. In addition to increasing household food production, nutrition and incomes, these activities help restore the damaged environment, build confidence and foster solidarity between the refugee and host communities.

Your impact, two years on

Thanks to the generosity of Canadians and funding from Global Affairs Canada, Development and Peace – Caritas Canada and its partner have come to the aid of nearly 100,000 refugees in camps in Cox’s Bazar District, and 6,000 Bangladeshis affected by the influx of Rohingya refugees. Our new project will support host populations for a year. It will target particularly vulnerable groups, paying special attention to women.

With conditions still being far from conducive for the safe and dignified return of Rohingya refugees, your support will enable us to help more than 200,000 refugees and expand our initiatives among host community families.