Pope visits Development and Peace partner in the Philippines 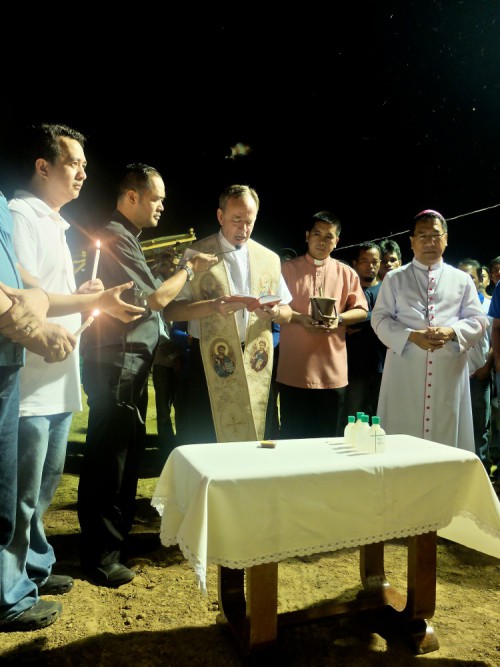 On his recent visit to the Philippines, Pope Francis spent a day in Tacloban meeting with survivors of Typhoon Haiyan. While there, he was hosted by the Archdiocese of Palo, whose Social Action Centre is one of Development and Peace’s main partners in its response to Typhoon Haiyan in the area. With the Archdiocese, Development and Peace has contributed to the construction of temporary houses for families, helping people to regain their livelihoods and supporting community organizing activities in the diocese.

Last August, when a Development and Peace delegation visited the diocese, members were warmly received by Archbishop John Du, who gave them a tour of the cathedral, which had suffered extensive damage from the Typhoon, and showed them the construction site of the Pope Francis Centre for the Poor. With the ground about to be broken for construction, Archbishop Du invited Archbishop Michael Miller of Vancouver and Bishop Jean-Louis Plouffe of Sault Ste-Marie, both part of the Development and Peace delegation, to bless the ground on which the centre would be built.

Due to inclement weather, the Pope could only perform a brief blessing of the centre, which will provide services to orphans and the elderly. Sadly, the tropical storm caused scaffolding to collapse at the site where the Papal mass was held, causing the death of Kristel Padasas, a staff member of Catholic Relief Services (CRS), one of the Development and Peace’s partners in the area. We extend our sincere condolences to Kristel’s family and to her CRS colleagues in the Philippines.

Despite having to cut short his time in Tacloban due to the weather, the Pope still touched those present with his empathy for their suffering. “So many of you have lost everything,” he told the people of Tacloban. “I don’t know what to say to you, but the Lord does know what to say to you. Some of you lost part of your families. All I can do is keep silent. And I walk with you all with my silent heart.”