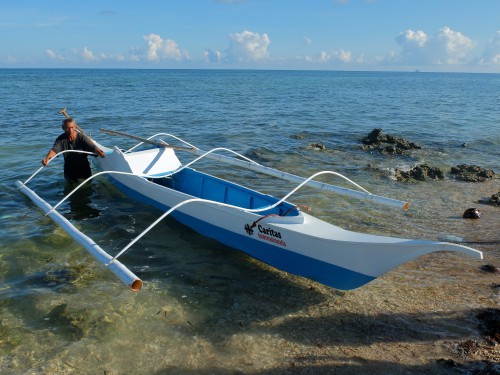 When Typhoon Haiyan tore through the Philippines, it not only destroyed people’s houses and swept away their belongings, for many, it also took away their ability to make a living.

In the areas affected by the Typhoon, communities mainly rely on fishing, subsistence farming, rice cultivation, the sale of coconut by-products to eke out a living. But the Typhoon took that all away in mere minutes, as it crushed the traditional slim wooden canoes used by fishermen, flooded crops, uprooted acres of coconut groves and killed livestock.

And if one does not earn a living, it makes it nearly impossible to consider building a new house or even repairing one that is damaged. It creates a vicious cycle of poverty that can be overwhelming. Just ask Rodel Doble, a fisherman from the community of Calawaisan in Northern Cebu.

“It’s like having the weight of the world on you, when you have no money for another house,” says Rodel, who is a father of two young girls.

Rodel says that his house was totally scrapped by the storm. “The storm was indescribable. I hugged my two daughters tightly before they went to the evacuation centre.”

Thankfully, his family survived, but getting his family back on their feet has not been so easy.

“Finding money for my house, for food, for the education of my children… Every day, I struggle to meet these needs.”

Before the storm, Rodel would accompany other fishermen out to sea to help with the catch, of which they would split the profits. Not owning his own boat, however, limited his income and, as a consequence, his ability to recover from the storm.

Caritas Philippines-NASSA and the Social Action Centre of the Diocese of Cebu with support from Development and Peace has been helping people like Rodel to transition back to work, by providing fishing boats, livestock and agricultural equipment.

In all cases, however, those who have been identified as most in need of support for restarting their livelihoods, are expected to in turn help break the cycle of poverty by giving back a portion of their catch or an offspring of their livestock to the community as a way to help others.

For Rodel and his family, this has been life-changing and he really appreciates that he too can contribute to his community. “It is such a blessing from God to have my own boat. What I give of my catch is such a small compared to what we have been given.”