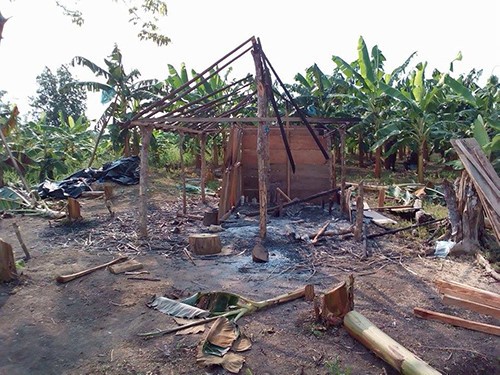 As the evening sun set on March 18th, approximately sixty hooded men stormed the home of Mrs. Marleny Benitez in the Chocó region of Colombia, firing guns, while restraining and beating her son and a neighbour, causing significant injury to all.

Following these initial attacks, they proceeded to burn Mrs. Benitez’s house, violently evicting her and her family. Once inside the Santa Maria police station, some of the men removed their hoods in front of numerous civilian witnesses. The police then refused to intervene on behalf of the family.

Mrs. Benitez and several of her neighbours have been targets of these armed men because they are displaced families returning to their land. The region of Chocó, which is mainly inhabited by indigenous and Afro-Colombian communities, has been the site of ongoing violence for years with many families forced to flee their land under the threat of harm. Much of their land has been violently taken over by the agri-business, which is exploiting the land to grow palm oil, bananas and other monocultures.

With the help of local organizations like the Inter-Church Commission for Justice and Peace (CIJP), which is one of Development and Peace’s partners in Colombia, those who have been displaced have been advocating and negotiating with the government for the return of their land. Although the government has begun to re-distribute land and families are returning, it is clear that it is still a highly insecure area with no guarantee of safety for those wanting to start their lives over.

The armed men who attacked Mrs. Benitez were wielding chainsaws and destroyed homes and buildings belonging to other returning families.

“The attack on Marleny Benitez’s family is particularly hurtful because it was forewarned. They had already been threatened. They had been displaced from their lands over 17 years ago, but bit by bit they had begun to return,” said Fr. Alberto Franco, Executive Secretary of CIJP, who learned of the attack on Mrs. Benitez and her family while in Canada as a Development and Peace solidarity visitor.

Mrs. Benitez, her son and neighbours are currently recovering from their injuries. He noted that just 18 months ago this particular family was intimidated and threatened by an occupying force of 100 men, who claimed that her land had been given to them and they would reclaim it through violence. Despite insistence by an ombudsman that the region is unsafe for the displaced to return, the land restitution civil circuit court denied an injunction for protection filed by the families of the Council of Communities, citing that there was no evidence of violence in the territory.

“These families were threatened just a few days ago and the government said that there was no risk; that was why there was no injunction in place protecting their lands or their family. And now, with this attack, one can see that there are some very strong economic interests at play that fail to recognize the rights of the people to be in their territory and that they continue to place human life at the feet of profits, profits over life,” said Fr. Franco.

Development and Peace is continuing to work with CIJP to help restore peace in Chocó and defend the rights of the communities there.

Bring them back to the table: urging the Canadian government to defend the peace process in Colombia
Read more

May Peace be With Her: Empowering women to act for peace in Colombia
Read more