Haitian partner MPP stands up for food sovereignty in Haiti 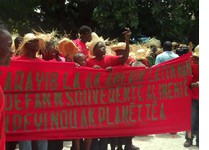 The Mouvement paysan Papaye (MPP), an association of small-scale farmers in Haiti that is supported by Development and Peace, organized a massive march on Friday, June 4th in response to the announcement that agricultural giant Monsanto would be distributing 475 tonnes of its seeds in Haiti.

After the devastating earthquake in Port-au-Prince on January 12th, 2010, there has been growing concern over food security in the country as most agricultural activities have been severely disrupted or hampered. However, MPP and other local groups have been actively proposing and putting in place local solutions and feel that the recovery of the country should not come at the cost of compromising the country’s biodiversity and the livelihood of its thousands of peasant farmers.

Chavannes Jean-Baptiste, founder and executive director of MPP, organized the march because the threats to Haitian agriculture and autonomy are too great. He said that the farmers fear that these hybrid seeds will lead to the extinction of local varieties, create a dependence on foreign seeds and fertilizers that most can’t afford and will lead to the transformation of Haiti’s mostly organic and local farming towards one that is favours the mass growth of a single crop and is aimed towards exportation. This will have very little benefit on the local population.

In just a few days, MPP managed to mobilize over 10,000 farmers who, adorned in bright red shirts and straw hats, walked 7 km along the dusty country road of Hinche, a small rural town close to the border of the Dominican Republic, to demonstrate their opposition to the Haitian’s government acceptance of this donation.

The march attracted worldwide attention and many supporters joined in to show their solidarity, including D&P Programs Officer for Haiti, Debra Bucher. “The peasant movement in Haiti is aware of the importance of protecting the environment and the rights of small scale farmers in their efforts to promote food sovereignty in Haiti. It was very moving and inspiring to see so many people from different peasant organisations come together and peacefully demand for respect and a better future.”

D&P contributed to the organization of the march, and our logo was proudly featured on the distinct red t-shirts worn by the crowd. D&P has been supporting MPP, which has 63,000 members, since 1988. It most recently helped the organization launch its own seed distribution program, which includes only local seeds.

Watch footage from the march: