Our partners prepare for Hurricane Irma in Haiti 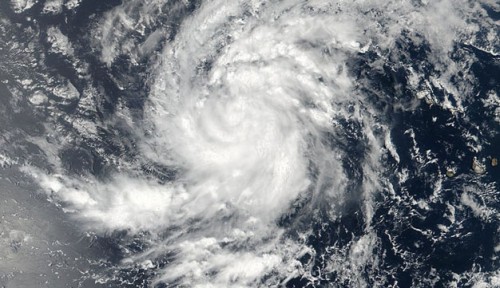 Hurricane Irma has already been deemed one of the strongest storms to ever hit the Caribbean. The category 5 storm, which has winds reaching speeds of 295 km/hr, is set to make landfall in Haiti on Thursday evening. Development and Peace is in contact with several of its local partner organizations in Haiti and is closely monitoring the impact of the storm.

Here are reports from our partners on the ground as they prepare for this oncoming disaster. Our thoughts and prayers are with them as they must once again face a devastating natural disaster.

"The population is informed about the arrival of the hurricane but the people are ill prepared and unorganized," says Emile Eyma, director of this partner organization which works to support poor communities in Cap Haitien, as well as rural farming communities in the region. Although the IRATAM teams are working hard in Cap Haitien and in the rural areas to support the farmers’ organizations, preparations by the Haitian government are inadequate.

“People living on the coast or in flood prone areas have not been evacuated.” The government has only announced the availability of equipment and food to respond to short term post hurricane needs.

“We must stress that the inhabitants of the northern region, contrary to those in the South, are not accustomed to the dangers of hurricanes, as the region is normally spared the worst. This lack of familiarity can only make things worse. Others put their faith in God and believe that the hurricane will shift path and spare Haiti.”

ITECA carried out our program to rebuild more than 400 houses after the 2010 earthquake. This program was praised by the Canadian and Haitian governments and the new homes stood firm in the face of Hurricane Matthew in 2016.

The government has issued a red alert over the entire region and schools will be closed until September 8th. The departments that are most vulnerable to being hit by the storm are: the Nord, the Nord-Ouest, the Nord-Est, Artibonite and the Plateau Central. ITECA is present in the high and low Artibonite and the Plateau Central and many of our partners are present in other departments.

On September 5th, the Ministry of Planning and External Cooperation held a meeting with local NGOs, where ITECA was present. The ministry insisted on two priorities:

The majority of the organizations present at the meeting are prioritizing humanitarian aid. There is an information campaign in place and the government is asserting its leadership in managing the situation that could be created by Irma. Mobilizing emergency aid will certainly be deficient due to problems with institutions and infrastructure that affect the country in many ways. For instance, it is schools that are used as temporary shelters, but the school year is about to begin and the schools will need to be liberated quickly. This will create a problem for the relocation of families.

The main concern of communities is getting back on their feet. They do not have any false illusions. The level of ecological degradation of the country and the unstable weather conditions, which are worsening with climate change, means that Haiti is exposed to the impacts of recurring natural catastrophes that create mass devastation. Relaunching subsistence farming and other livelihood activities will be an immediate need if Irma causes significant damage. The priority for ITECA will be to accompany communities in getting back on their feet.

It will be a question of restoring the collective capacity of community actors. This will need to be done through an integrated and participative approach, where those affected by the hurricane will not be targets of aid, but the main actors in the reconstruction of their communities. The following areas of intervention will be prioritized:

Caritas Haiti has activated its contingency plan in order to anticipate the potential impacts of the hurricane and be able to put in a place a coordinated and adequate response for potential victims in collaboration with our partners. The following preparations are being made by the Caritas network:

The main first response activities will be the distribution of food, hygiene kits, kitchen supplies, clothing, sleeping bags and mattresses, all while considering gender-specific needs.

Development and Peace also works with community radios, who have an important role to play during a crisis. Since the start of the hurricane season, these radios have been broadcasting relevant information spots and programs.

Since May 31, these radios have been coordinating an awareness campaign for the 2017 hurricane season. A wide variety of activities have been carried out to strengthen the capacities of the radios, both on the technical and content level, with a focus on topics related to the hurricane season. The radios are now ready to apply the different techniques and newly acquired skills. Journalists and radio members share the latest information on a newly created WhatsApp group. (In Haiti, Internet is not always available, but everyone has a cell phone to use WhatsApp.)

This week, radios in areas likely to be hardest hit by Irma have been taking steps to protect radio equipment.