As the Olympics draw to an end, no Olympic gold for Rio’s poor 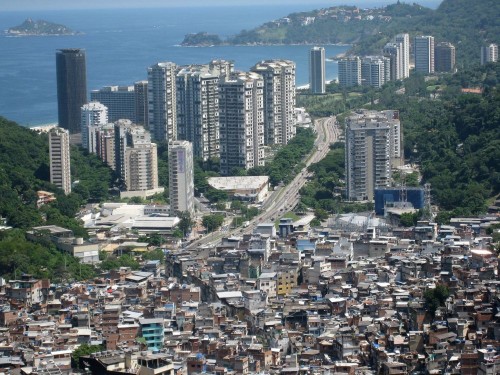 Seven years ago, when Rio de Janeiro won its bid to host the 2016 Summer Olympics, it was a moment of hope for its 12 million citizens, including the 25% who live in favelas. There were promises of clean water for all, the decontamination of Guanabera Bay and improved public transit and infrastructure, but little has been achieved. For the last two weeks, the eyes of the world have been fixed on the city’s shiny new stadiums, and the athletes and spectators who have travelled near and far to be there. What they are not seeing in the glare of the cameras, however, is those who have paid the highest price for these Olympics: Rio’s poor.

The impacts on Rio’s poor go beyond lack of benefits from the games. Throughout the process, they have faced discrimination and injustice. The situation has worsened with the recent impeachment process against President Dilma Rousseff, which has left Brazil in political turmoil. The country is now governed by an unelected and an unpopular interim President, Michel Temer, who also faces corruption charges, and is pushing through reforms that promote privatization and exclude the poor.

Development and Peace’s partner FASE works with Rio’s poor communities, known as favelas, to support them in countering the inequalities of urban development and demanding respect of their rights. They work to ensure the democratic participation of these communities in decisions that affect them, and which sadly has not been the case for much of the planning around the Olympic Games. Here, Aercio de Oliveira, FASE Rio coordinator, tells us how the Olympics have affected Rio’s poor.

1. What has been the impact of the Olympic preparations on the communities you work with?

One of the main impacts has been forced evictions and police violence. In the port area, where we work, there are about 700 families who were removed. Since preparations for the World Cup and the Olympic Games began, 77,000 people have been removed throughout the state of Rio de Janeiro. In the favelas where we work, there is also an extremely violent police presence. The number of young people killed in favelas has been alarming (According to Amnesty International, at least 2,500 citizens have been killed by police brutality since 2009.) Life in the city, especially for those living in the favelas of Rio de Janeiro, has become militarized. Today, people leave home for work and do not know if they will make it home in one piece.

2. Have the poor benefitted in any way from the Olympics?

I do not see how they have benefitted. So far, we have only identified negative impacts: there is more police coercion; increased difficulties in getting around the city by public transport or on foot; public health and education services, amongst others, are in disarray; people were removed from their places of residence to areas very distant from the city, etc. All this to give rise to the facilities to serve the Olympic Games.

3. There were many promises made when Rio won the bid to host the Olympics, particularly to clean up Guanaraba Bay. Have any of these promises been fulfilled?

None of the promises that were made and that would meet the interests of the majority of the population, have been fulfilled. With Guanabara Bay, the government promised to decontaminate it by 80%, but they have barely reached 50%. They did not create sport facilities for public use. In terms of urban mobility, little was done to improve the means of transportation for poor communities. Rather, what has been accomplished benefits wealthy families, the real estate market for the middle and upper classes, and the tourism industry. There have been some works completed, such as the extension of the subway to the Barra da Tijuca neighborhood, where most of the Olympic competitions are taking place, and the Light Vehicle on Rail (VLT) is working in the city centre. But overall the impact of the games has been very negative. Furthermore, what with the economic and fiscal crises of states and municipalities, we run the risk of seeing many unfinished works. They will stop when the Olympic Games are over. In general, the promises made by private investors and politicians are aligned with a vision of a city based on market principles and profit, which violates rights and undermines the idea of a city that provides services, equipment and many other common goods. This way to reform the city only serves a few, especially in a reality such as that of Rio de Janeiro. Even if Rio is the country’s second largest economy, the city is savagely unequal. The port area, which has been turned into a postcard, entry gate to the city is a prime example of the privatization of public spaces.

4. How has FASE responded to this situation and the ongoing political crisis?

We have responded by mobilizing with other social movements and groups that are resisting violations perpetrated by private investors of large financial and economic corporations – as well as by State institutions, that are unfortunately also greatly involved in rights violations. We are supporting social groups that are creating pressure and resistance, and we also educate and create awareness as a way to strengthen and give visibility to these actions. We are helping to coordinate a network of human rights organizations. During the week of the opening of the Olympics, we participated in the "Day of Struggle 2016 - Exclusion Games." We participated in this great mobilization and activity from the start as it is one of the ways that social movements and organizations like ours could show how the Olympics have negatively impacted the lives of so many people.

5. As people around the world watch the Olympics, what is the one thing you would want people to know about the situation in Rio that the cameras are not showing?

How the State, which should be the main protector of human rights, is the one who is infringing on those rights. Basic rights, such as the coming and going of people who live in poor peripheries and favelas of Rio de Janeiro. We want people to know that the legacy that remains is for the tourism and construction industries, real estate development companies, and that large amounts of public money have served private interests. In other words, sporting events like the Olympics, the World Cup, etc., are nothing more than excuses to concentrate wealth that is produced by all of society into the hands of a few and facilitate the creation of more capital. These types of events present private companies with an opportunity to increase their profits with the support of politicians and places the State under their influence. This alliance with the State creates an illusion "legality" to unjust and anti-democratic measures. These are things that are not disclosed by the press in Brazil, as they are allies of the politicians and corporate interests that are in collusion.

6. Is there anything that can be done so that the Olympics can leave a positive legacy for all the citizens of Rio?

The institutions that make up the Brazilian state should act from the basic idea, which founds modern republics, which is that public resources should serve the public interest. And in this case, especially those most in need and excluded. We know that it is not only in Brazil that this principle is less and less applied. Democracy and rule of law are becoming increasingly fictional concepts. Here, the state and corporate interests are shamefully working hand in hand, pillaging for private profit. And, for our country that has a history of slavery, and is one of the richest yet most unequal in the world, we need strong mobilization and lots of social pressure so that this way of functioning changes.