On October 31, pray for peace in Syria 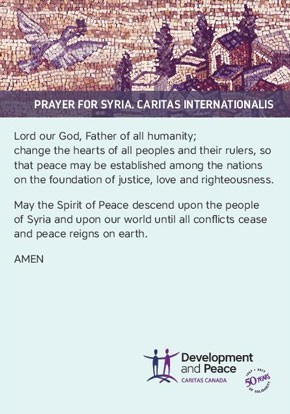 On October 31, Development and Peace – Caritas Canada invites Canadians to join Pope Francis in a day of prayer and action for peace in Syria. This day, which marks the 500th anniversary of the Reformation, was chosen by the Pope and Caritas Internationalis to unite in prayer, as more than 10,000 faithful will be gathered together in Sweden for an ecumenical event.

Every day, the people of Syria continue to be the victims of a brutal conflict. Last October 12, Pope Francis made another appeal for peace in Syria: “It is with a sense of urgency that I renew my appeal, imploring those responsible with all my strength, that steps be taken toward an immediate ceasefire, one imposed and respected at least for the time necessary to allow the evacuation of civilians, especially children, who are still trapped under cruel bombardment.”

The neighbourhoods of East Aleppo — where nearly 250,000 people live — are still under siege. Despite a brief truce last week, no medical evacuations took place and no humanitarian aid reached any civilians. 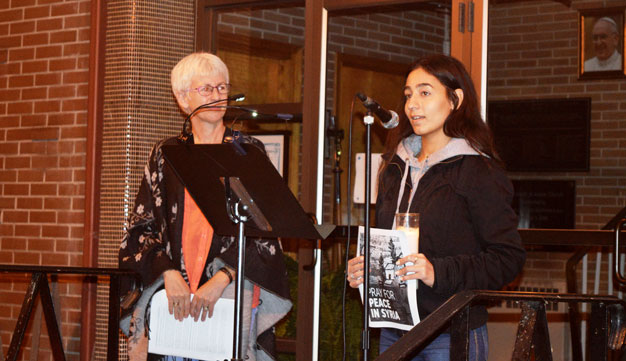 During a prayer vigil on October 4 at the St. Francis of Assisi Parish – Diocese of Saint-Jean-Longueuil, Carol, a 24-year-old Syrian refugee, thanked the assembly for their solidarity and offered a prayer for peace in Syria.

At a special session of the UN General Assembly on October 20, 2016, the Minister of Foreign Affairs, the Honourable Stéphane Dion, reiterated the importance of ensuring unhindered humanitarian access: “The darkest chapters of the Syrian tragedy are being written before our very eyes, as savage bombings have targeted civilians, civil infrastructure, humanitarian convoys, public markets and hospitals. The worst horrors are taking place in Aleppo, which has been torn apart by bombs; besieged, starved, wounded and terrorized by appalling tactics. . . . Many efforts have been made over the past few months. But Syrians continue to suffer. We must act immediately.”

Encouraged by the minister’s leadership in working for peace, Development and Peace reiterates its call to the Canadian government to do more for peace in Syria by focusing on these three actions:

On October 31, let’s show solidarity with our Syrian sisters and brothers, and unite in prayer so that our message of peace and hope might be heard and their dreams fulfilled

I dream of seeing my little sister being safe and fulfilling her dreams.

I dream of seeing my big sister and her children in peace, so they can continue their education and become what they dream of becoming.

I dream of seeing my brother able to provide a good life and a safe environment for his children, like my father did for us.

I dream of seeing girls get better educational opportunities, and be able to study, work and live in security.

Here are other ways you can help: