A new school for a new future 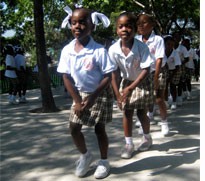 The Missionary Sisters of the Immaculate Conception, a religious order that was founded in Montreal by Délia Tétrault in 1902, has been striving to provide education to Haitian communities since the congregation arrived in the country in 1943. Today, the sisters run eight schools across the country, including the Mother Delia Institute, an all-girls primary and secondary school in the bustling Delmas neighbourhood of Port-au-Prince. When the school opened its doors in 2002, it welcomed 140 students. Now, it counts over 850.

When the earthquake of January 12th struck, the building for the primary school crumbled. Fortunately, the students had finished classes for the day and none were inside the building when it collapsed.

"When the school collapsed, what was essential was finding the children. The first question we asked ourselves was, where are all the children?" explains sister Josette Drouinaud, director of schools. "The rest is all just material and can be taken care of."

The congregation’s strong ties with their community soon led to a flood of parents arriving at the site of the school to make sure the sister’s had survived and were safe. "They were worried about us, as well," she remarks.

By March, the school had managed to re-open by sharing space with the secondary school, improvising classes under trees in the schoolyard and eventually installing large tents that house up to 70 students at a time.

"The students had a hard time staying under a roof so we did a lot of outdoor activities with them. We would go for walks or have them dance. The dancing seemed to really help them get their anxieties out," says Sister Josette.

Clearly, the girls have found comfort in being back in this environment, gleefully giggling around the schoolyard during their lunch break. But the sisters also know that the students will not benefit from a proper education until they are back in real classrooms, which is why Development and Peace is a partner in helping them build a new school that will have 20 classrooms and is built along anti-seismic standards.

The school is being built on the former site of the sister’s mother house, which also collapsed during the quake, but for Sister Josette it is now more important to use the space for the new school.  "We wanted to aim higher and take the opportunity to respond to the needs in the neighbourhood. We know that the demands are growing here. This neighbourhood has children from all social classes and parents want to give their children a quality education and want to have the opportunity to send their children here, so we want to make the school bigger to make sure they have that opportunity," she says.

The construction site is bursting with activity. Workers are already laying the foundation, but with no mechanical machinery, progress is moving slowly. The two-storey school is expected to be ready for the following school year.

But for Sister Josette, just knowing that the school is on its way is a sign of a better future for the country. "We want to put the girls first because education is so important for them and for this country, if it is to develop."