Development and Peace—Caritas is proud to become part of a new coalition, composed of six catholic organizations, whose goal is to foster relations with Indigenous Peoples.

Our Lady of Guadalupe Circle brings together Indigenous peoples, Bishops, clergy, lay people, and institutes of consecrated life engaged in renewing and fostering relationships between the Catholic Church and Indigenous peoples in Canada. The coalition’s mission is fourfold:

“It is with humility and hope that we join this coalition, which represents another step towards improving our relationships with the Indigenous peoples of Canada,” said Josianne Gauthier, Director of In-Canada Programs, Development and Peace. “The development of a forum where participants can share their experiences with the Church and Canada’s Indigenous peoples is an essential part of creating a truly effective reconciliation process. 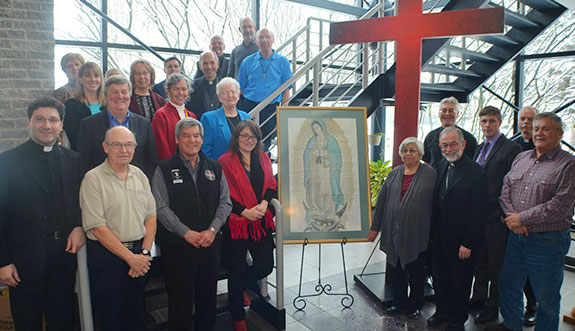 Development and Peace—Caritas is proud to become part of a new coalition, composed of six catholic organizations, whose goal is to foster relations with Indigenous Peoples.

Our Lady of Guadalupe was proclaimed patroness of the Americas by Pope Pius XII in 1946. The devotion dates to 1531 when the Blessed Virgin Mary appeared as a young Aztec woman to Juan Diego, a convert to Christianity whose Indigenous name was Cuauhtlatoatzin (“Eagle Who Speaks”). The site of the apparition was called the Hill of Tepeyac, which eventually became part of Villa de Guadalupe, a suburb of Mexico City. Today the site is an international Marian shrine. Each year, some 20 million pilgrims and visitors come to the shrine, uniting Indigenous and non-Indigenous Catholics from all the Americas. Authentic devotion to Our Lady of Guadalupe shows how the Catholic faith is expressed in Indigenous cultures. In 2002, Juan Diego was declared a Saint by the Catholic Church.

Our Lady of Guadalupe Circle’s complete mission statement is available at www.cccb.ca.