Nepal: Six months after the earthquakes 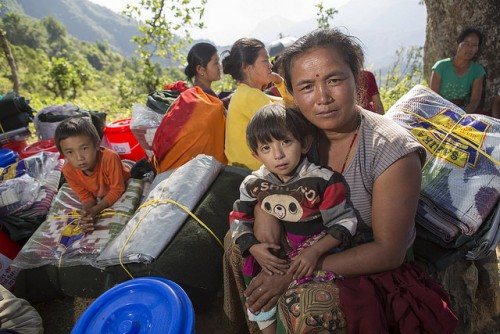 In April and May 2015, the districts of Gorkha and Sindhupalchok in central Nepal were hit by two violent earthquakes that affected tens of thousands of people. Nearly 9,000 people were killed and more than 2.8 million were left homeless. Faced with the urgent needs of the population, Development and Peace mobilized in the early hours following the disaster in order to provide victims with emergency assistance. Almost $4.5 million was collected thanks to the great generosity of Canadians.

In Nepal, the preferred construction materials for rural homes are clay bricks, mud and sheet metal. Although, these light materials caused an estimated 900,000 houses to be damaged or destroyed, according to government estimates, they also help to explain the low number of deaths in comparison to other earthquakes of this magnitude. In this reconstruction phase, there are serious constraints and numerous unanswered questions: How to re-use debris? Where to live during reconstruction? How to get materials to hard-to-access areas? In this context, those whose homes were completely destroyed seem "luckier" than those whose homes were damaged. The latter will have to destroy their dwellings themselves before rebuilding them.

“During the last six months, we have sought to support communities living in the least accessible and most remote areas, especially those located in mountainous regions in the north of the country. Due to the topography and road conditions, this has been the most complex aspect, even though the populations have shown incomparable resilience and great solidarity,” explains Stéphane Vinhas, Emergency Program Officer at Development and Peace.

Development and Peace, in partnership with Caritas Nepal, supplied shelters for people whose homes collapsed. To respond to the emergency, teams on the ground first provided tarpaulins, tents and rope for the construction of temporary shelters, as well as basic supplies (mattresses, kitchen utensils) and hygiene items for more than 195,000 people.

The government and local communities have the primary responsibility for the reconstruction of homes, villages, cooperatives, and public buildings such as health centres and schools. The foundations of new homes must meet specific technical standards to withstand future earthquakes. These new constructions are the product of communities that are educated, aware and, most of all, prepared to face the next earthquakes likely to happen in this part of the world.

Even if, in anticipation of winter, reconstruction was completed more quickly in the mountainous north of the country, important issues have to be taken into account with the continuation, such as the scarcity of available labour in a country where most men work abroad and where skilled construction workers are few and far between. The time of year is also cause for concern: the monsoon slowed reconstruction until late August, and people must now return to work in the fields.

About 80% of Nepal’s inhabitants are involved in agriculture, particularly women. Following the collapse of their granaries caused by the earthquakes, more than half of all small farmers lost their rice, corn, wheat and millet harvests. Many lost their gardens as well as their tools for field work. Development and Peace helped deliver production equipment, farming tools, animals and seeds for disaster victims. The organization also relaunched community agricultural cooperatives and is supporting the rehabilitation of irrigation networks.

In the months ahead, Development and Peace will implement its program around three key themes: the reconstruction of individual homes, agricultural economic recovery, and the fight against human trafficking.