May Peace be With Her: Empowering women to act for peace in Colombia 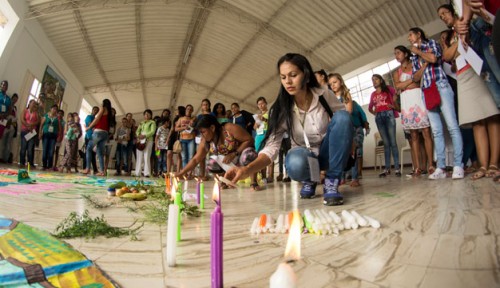 In 2012, following 50 years of conflict between the Colombian government and various guerrilla groups, President Juan Manuel Santos officially started peace talks with the Revolutionary Armed Forces of Colombia (FARC) and more recently, in 2016, with the National Liberation Army (ELN).

Despite the signing of a peace agreement in late 2016, many Colombians, especially those living in rural communities, continue to face multiple challenges. For half a century, rural communities have borne the brunt of the conflict. The struggle to control land, territory and resources are at the heart of this conflict, which has led to the forced displacement of an estimated seven million rural inhabitants.

For decades, those most affected have been the peasant farmers, Indigenous and Afro-Colombian communities. They have endured violence, massacres, assassinations, disappearances and have been terrorized.  In several regions, particularly areas where government control and services are scarce or absent (services such as healthcare, education, security, roads and electricity), rural dwellers’ lands have been violently seized by agri-food and mining industries, and residents’ rights have been systematically violated.

Women have been subjected to acts of violence perpetrated by armed belligerents and by members of their own communities. Yet their plight has long been ignored and gone unreported. The longstanding violation of women’s economic, political and social rights means that today very few Colombian women participate in politics, organizations or productive life.

Against this background, the Coordinador Nacional Agrario (CNA – National Agrarian Coordination), a national peasant movement and Via Campesina member, has developed training programs and places for women to participate in learning, discussions and plans to improve their lives and those of their communities. They learn to assert their rights and develop proposals for land development. They also engage in collective and community efforts to build a culture of peace.

“It became clear to us that the major stumbling block to our active participation arose from gaps in our training and organization, and because we needed to formulate an inclusive political proposal. This realization gave rise to the idea of creating an inter-ethnic political training school for rural Colombian women, and in 2014, Development and Peace helped us establish this itinerant school,” explains Luz Estella Cifuentes, head of the women’s secretariat and the CNA’s inter-ethnic political training school for peasant farmers, Afro-Colombian and Indigenous women.

The goal of the political training school is to empower Colombian women living in rural areas. In this school women analyze and discuss gender equality, the challenges to development, women’s active participation in the life of the community, and women’s participation in building peace at the local, regional and national levels.

At workshop sessions, they develop leadership and public speaking skills, and they are encouraged to share their ideas and strategies for land development. They also develop an understanding of their rights, a readiness to demand policy change in support of a governance model that addresses their needs, and an ability to promote peace in Colombia.

This is crucial, as the active participation of rural women in decision-making forums is not only key to improving their living conditions, but central to building a lasting peace in their nation.

Watch this video about the political training school for women:

Bring them back to the table: urging the Canadian government to defend the peace process in Colombia
Read more