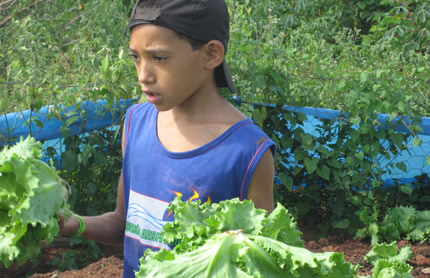 “While visiting the CPT, we found out that, in Brazil just as in Canada, both organizations have their roots in the Catholic Church in the period shortly after Vatican II. In Brazil, faced with the poverty of the peasants, the Bishops founded the CPT right in the middle of a dictatorship. Several organizations with more specific vocations grew out of CPT. The Canadian Conference of Catholic Bishops, for its part, founded Development and Peace to promote solidarity and more equitable North-South development, offering activities and projects that embody the values of the Gospel message.”
Richard Beaucher, member of Development and Peace

In Brazil, private companies own just 15 percent of the country’s farms, but three-quarters of all arable land. Smallscale farmers, who produce most of Brazil's food, own the vast majority of farms. Yet they have access to only one-quarter of all arable land. These numbers tell the story of a country with tremendous natural resources where the majority of people must nevertheless struggle to achieve food sovereignty. “It shows a lack of wisdom to keep millions of people away from the means of producing food,” says José Gomes Neto, “concentrating the wealth and property that nature intended for everyone in the hands of just a few!”

With over 36 years of experience in the struggle for agrarian reform and the rights of farm workers, Development and Peace partner the CPT supports, trains and organizes farming communities throughout Brazil.

The Brazilian government recently set up two innovative programs that will increase local markets for small-scale farmers – the Food Acquisition Program and the National School Feeding Program. This is in response to the efforts of thousands of people and communities that the CPT has worked with on land reform. Up to 40 percent of the food served by public institutions such as hospitals, schools, prisons, seniors’ centres and community groups must be produced by small-scale, local farmers who use agroecological methods. This is a significant change, not only for small-scale farmers. Previously, those who used these services had access only to poor-quality processed foods.

To benefit from the programs, small-scale farmers must meet several requirements, such as creating business plans and producing food in an agro-ecological manner. The CPT helps them with these new challenges, through training and by creating networks for sharing best practices.

Thanks to these programs and to the support of the CPT, small-scale farmers are now producing more consistent yields and have a market for their products. Some are even beginning to create artisanal products and start small businesses.

People of the land and water

The mission of the CPT is to strengthen the capacity of poor Brazilians, the “people of the land and water,” to achieve social justice for their communities. To this end, CPT organizes annual marches throughout Brazil called Romarias of Land and Water. The marchers, called romeiros, travel great distances to share their experiences, their struggles, and their hopes with each other. The gatherings are a chance to reflect together from a perspective that is both pastoral and political.

Change the system, not the climate!
This was the slogan of the last Romaria of Land and Water in the state of Bahia, where several thousand people met in the town of Bom Jesus de Lapa. Climate change was the focus of their reflection, which built on the question asked in the previous year’s event: “Mother Earth, where are we going?”