The lives of human rights defenders in Latin America at risk

On January 7th, 2016, Nilce Magalhães de Souza disappeared from her home, never to be seen again. Nicinha, as she was known locally, was a leader in the Movement of People Affected by Dams (MAB) in Brazil, which is a Development and Peace partner. She was actively protesting against the Jirau Hydroelectric Plant in the northern province of Rondônia in the Amazon. The construction of the dam has brought only hardships for local communities, who are experiencing forced displacements, land erosion, the disappearance of fish stocks and economic hardships from lost crops due to the flooding of the local river.

Nicinha was calling for respect of the land, forests and rivers of this region, which is rich in biodiversity, and for compensation for communities that are experiencing devastating impacts from the project. Her disappearance has never been properly investigated and the lead suspect recently fled from prison, causing serious concern over the impunity of the crime.

“The work of human rights defenders is critical to build a democratic society and for the consolidation of the rule of law.”

The Inter-American Commission on Human Rights 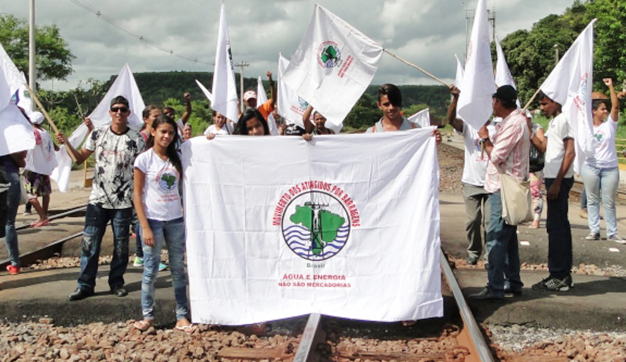 Members of the Movement of People Affected by Dams in Brazil face threats for defending their land and environmental rights. Credit: MAB

Increasingly, human rights defenders in Latin America are facing harassment, intimidation, threats to their lives and even death for simply calling for respect of the rights of their communities. In 2015, there were 50 killings in Brazil over land conflicts and Honduras continues to be one of the most dangerous countries for defenders of human and environmental rights.

The Inter-American Commission on Human Rights (IACHR), based in Washington D.C., issued a statement condemning this situation, citing the case of Nicinha, as well as the killings of five other human rights defenders in Brazil in the first two months of 2016 alone.

The statement also calls attention to the deaths of two members of the Landless Peasant Movement (MST), another Development and Peace partner. It stresses that States have an obligation to investigate and bring to justice perpetrators of these crimes, and urges for the protection of human rights defenders:

“The Commission also reiterates that the acts of violence and other attacks against human rights defenders not only affect the guarantees of every human being but undermine the fundamental role they play in society. These acts also affect the people they work for, contributing to the vulnerability and defenselessness of all those whose rights they champion.”

The situation for activists also remains critical in Honduras. The recent murder of Indigenous Lenca leader Berta Cáceres, which remains unsolved, caused a public outcry, yet was followed less than two weeks later by the murder of fellow Indigenous leader Nelson García.

Read more about the cases in Honduras.

Now, another Lenca woman, Ana Miriam Romero is being violently threatened for her opposition to a controversial hydroelectric project. The Los Encinos project, which is set to be built on ancestral lands of the Lenca, has caused deep divisions in the community of El Potrero, near Marcala in La Paz between those who oppose the project and those who believe it will create employment. The local authorities have made it very clear that they support the project and rule of law appears to have fallen to the wayside as the acts of violence are committed without any justice towards those who are protesting the project.

On May 9th, Ana Miriam, who is a mother with infant children, was intimidated by four armed men. This is not the first time that Ana Miriam has been the victim of violence. Last fall, she was beaten while pregnant by a group of men and police officers. Her husband, who is a leader of MILPA (Indigenous Lenca Movement of La Paz), has also received death threats and the couple’s house was razed to the ground in January.  Now, Ana Miriam’s husband has gone into hiding as death threats to human and environmental rights defenders cannot be taken lightly in Honduras: in 2015, a total of 20 Lenca leaders were killed in unclear murders believed to be linked to their opposition to similar mega projects.

Development and Peace is continuing to support its partners in defending human and environmental rights and in seeking justice for these terrible crimes. It is calling on Canada to raise its voice at the Inter-American Commission on Human Rights to urge member states to ensure adequate measures of protection for human rights defenders under threat, as well as pressing for proper investigations into these killings so that perpetrators are brought to justice.