Learning from past experiences in reconstruction 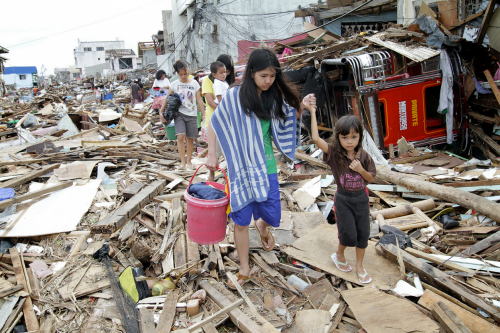 The world just marked the anniversaries of three of the most devastating natural disasters to happen in recent history: the 2005 Indian Ocean tsunami; the 2010 earthquake in Haiti; and the 2013 typhoon in the Philippines.

In all three cases, Development and Peace launched appeals amongst the Canadian public to respond to the needs of the population, particularly those of the most poor and vulnerable, who not only experience the worst effects of these disasters, but who are also most at risk of being marginalized in reconstruction efforts. Putting in place a program that respects the dignity of survivors and that fully takes into account the context in which that response is taking place is a long-term process.

For local organizations, the aftermath of a disaster can be particularly challenging. They must adjust their programs to provide aid to the communities they work with, all while dealing with the effects of the disaster on their own personal lives. The influx of foreign agencies and funding can also marginalize the knowledge and expertise of these local groups.

With the desire to support its local partners as best it can in facing these challenges, Development and Peace recently invited Claudette Weirleigh , one of the founders of the Institute of Technology and Animation (ITECA) and a former Prime Minister of Haiti, and Yuli Kusworo, who worked as an Architect and Team Coordinator with the local group Urban Poor Linkage (UPLINK) in Indonesia in Aceh, to a conference in Tacloban, the Philippines, to share their experiences with participants, which included Development and Peace partners, government officials and other local organizations, so that their responses can be informed by these lessons learned.

Here is some of what they had to share with participants.

1. What were the main lessons learned that can be used for the recovery response in the Philippines?

First of all, one has to be patient. In poor rural areas, the reconstruction process takes time. A few days after the earthquake, people gathered the debris from their collapsed houses to make provisional shelters to protect their families. By doing so, they made the need to import transitional houses a waste of money and totally irrelevant.

We have not been able to prevent international organizations from offering some transitional housing in the locality where we are working. But, that kind of construction has upset the social order in the region, because some young people have started to live on their own, which is not in harmony with our culture. Now, 5 years later, a lot of people are still expecting the permanent houses that some international organizations had promised, but these organizations are now far away.

In the approach promoted by ITECA, the local population participated actively in rebuilding their houses. Building permanent houses also created new jobs in the community. The main achievement has been to have people in the same community working together to help one another.

By using a community-driven approach in the recovery process in Aceh, we were able to have people as a network. This allowed us to see the difference between a top-down approach, where people are labeled as victims, and a bottom-up approach where people are treated as survivors. The quality of the result of a people-driven process proves that this approach can be used as an alternative solution for recovery in a post-disaster context.

Post-disaster reconstruction is about more than physical facilities, it is about community and relationships. Having trust in the people’s resilience and wisdom is paramount, and with a little help even the most traumatized people can immediately work together to begin to build a better life for themselves. Community participatory housing reconstruction can deliver a large number of well-constructed quality houses within a reasonable time frame.

One of the big challenges was that the “ex-pats” (foreigners) believed that they knew it all or that they knew better, but they did not grasp the reality of our country. Even in some technical fields (architecture and engineering), many lacked the needed level of expertise.

Some big international organizations have made profits out of the humanitarian assistance, and some members of their personnel were pursuing their own interests. From the beginning, the international community and some big international organizations had decided to bypass the Haitian government and the structures of the Haitian State. We had to fight with some donors’ agencies in order to be able to build permanent instead of transitional houses. It took several months of discussions before we were allowed to build bigger houses. We are now happy that the houses that we built are in harmony with the value of human dignity that we believe in.

Some of the problems that we faced had to do with logistics: the poorest people in Haiti live in the mountains where there are no roads. We solicited and received help from the Ministry of Transport. Also, the local population (often by foot) transported some of the materials needed for the construction.

The lack of leadership coming from the State was a big obstacle. To palliate this obstacle, we integrated an authority figure into the project’s Steering Committee. In parallel, the local population had to keep pressuring the State to play a leadership role.

The top-down policy from the central government was a big issue and challenge. The Indonesian government developed a “relocation policy” for impacted communities. It was not a realistic policy because most of Indonesia’s territory is in disaster-prone areas (i.e. volcanic eruptions, earthquakes and tsunamis). The government didn’t want to learn from communities, especially from local wisdom on community adaptations to disasters. So, the challenge is how to encourage national governments, local authorities, the private sectors and universities to adopt a community-driven approach.

3. What are/were the best practices from the perspective of communities, civil-society organizations and the government?

The local population living close to ITECA showed concerns and acted in solidarity with one another. During the emergency phase, they helped us distribute the tents and emergency kits. They also helped ITECA conduct a survey to identify the most vulnerable people.

What the local community did was to help build new roads; also the members of a solidarity group worked together to collectively build their houses.

I think the best practice is if the community, civil-society organizations and the government can build strong partnerships, where the roles of each are well-defined, so they can work together and support each other, rather than work in an overlapping scheme. In Aceh, it felt like we used best practices, not only from the community and civil-society side, but because we started working before the government had a plan on how to do recovery. So, I think in Tacloban there is a big opportunity to start the recovery process by using a community-driven approach. I believe that the community itself is full of great potential, and can be a model for other international organizations. I think that it is a great partner in this, because, as we experienced in Aceh, Development and Peace gave us total support to use a community-driven model.