Sunday morning in Lubumbashi, on the eve of the elections. All is calm. Last night, an arms bunker in a nearby military camp was raided, but we heard nothing. We are staying at the Archdiocese Mother House, right next to the St. Paul and St. Peter Cathedral, where scores of praying faithful gather for every mass. We can hear the religious hymns of the magnificent Congolese choirs.

Lubumbashi, a city of two million inhabitants, is the capital of Katanga, the southernmost province of the Democratic Republic of Congo. The southern part of Katanga is rich with minerals and holds some of the most important copper reserves, as well as the greatest store of cobalt in the world. Uranium can also be found here; in fact, the uranium used to make the Hiroshima and Nagasaki bombs came from Katanga. 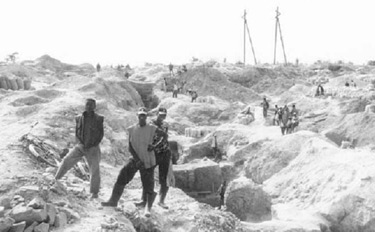 Katanga’s wealth is mined in one of two ways:

- Artisanal mining: Due to 25 years of instability and extreme poverty, of economic ruin and failed statehood, of conflicts and increased trafficking, hundreds of youth have taken up artisanal mining of copper and cobalt. Without any safety measures, young people aged 12 to 30 use their bare hands, as well as picks and shovels, to dig mine shafts and roadways. The minerals they extract are then sold to buyers who hold monopolies on given quarries. Past the age of 30, the miners have to abandon this demanding trade. They earn 3, 5 or 7 dollars a day, depending on their luck and the buyers’ rapacity. Through this work, the miners support their families, at least one million people in total. Artisanal mining is an important part of the local economy.

- Industrial mining: Over the past few years, foreign companies have won mining claims in the region, and some have already begun extraction work. Having driven the artisanal miners away, they imported modern equipment that enables them to extract much bigger quantities of minerals. The companies employ foreign engineers, some heavy equipment operators and local staff, who handle maintenance and site guarding work. Salaries are higher, but jobs are scarcer. Expatriate workers pay their income tax abroad. Companies, for their part, must remit taxes and royalties to the Congolese State, but only after amortizing their investment expenses, namely the cost of the heavy machinery that is manufactured elsewhere.

What does the future hold?

Day by day, hundreds of thousands of people depend on artisanal mining for their survival. But the medieval conditions under which it is practiced endanger both the health and lives of young miners. Artisanal mining also leads to corruption, while contributing nothing to the state.

Industrial mining, for its part, benefits little to local communities. The way in which the claims are awarded breeds corruption. Taxes and royalties, when paid, go to Kinshasa, the country’s capital, and are rarely invested into services for the population.